“What Happened to Anna K.” (with spoilers) 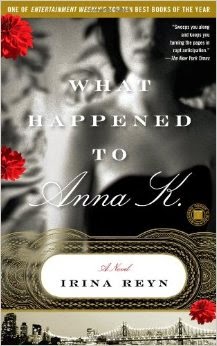 What nerve would it take to repurpose Anna Karenina into a 21st century novel?!

What Happened to Anna K. is a novel that just exactly does that. Author Irina Reyn takes advantage of the extremely traditional and constricted ways of the Bukharian-Jewish-Russian immigrant community in Rego Park, Queens, as a setting for her parallel to Tolstoy’s novel. I think she pulled it off, and I admire her accomplishment.

For Reyn’s Anna: “Bukharians remained exotic ... even if her own mother had been an exiled Bukharian in Moscow, so happily Sovietized that she had no desire to return to Uzbekistan.” Anna’s cousin Katia, in contrast, has a father (Anna’s uncle) who’s also Sovietized, but her mother married him directly from her home in Samarkand.

When they all get to New York, the two families join a community whose values are a perfect setting for Reyn’s nineteenth century novel that takes place in the present. Anna wonders how her fellow-immigrants could be “so pious, so earnest, especially compared with Russians whose post-Soviet cynicism drowned out religions, politics, nations.” But they are. (p. 39)

Anna is a complex character with ambitions and a great need to get out of Rego Park, out of Queens. At the beginning of the novel, she’s 37 years old and has had a job and an apartment on her own in Manhattan for ages, after having graduated from one of the NY public colleges. At the desperate urging of her parents, she finally agrees to marry a rich Russian without much in common with her. Her husband offers oodles of possessions and elegant clothing, dinners at expensive restaurants, and all the trappings of new wealth. She has a little boy named Serge, not Sergei like Tolstoy’s Anna’s son. Serge is named for Serge Gainsbourg, because Anna K. is a fan of French culture and film. But all in all, Anna is NOT HAPPY!

Cousin Katia, many years younger than Anna, is a simple character, a conformist who almost fails all her classes at college. She’s just not that bright. Her reputation has been ruined among the Bukharians by some mean boys, and so she dates an older totally American Jewish writing instructor (only an adjunct) – against all the norms of family etc.

Just on the occasion when Katia believes that her boyfriend will propose marriage, hoping her family will accept her terrible departure from their norms and expectations, Anna swoops in, steals the boyfriend’s affection, and moves in with him, abandoning her husband and child. Just like Tolstoy’s heroine, Anna accepts being an outcast from her community. Of course they live in his tiny Manhattan apartment, not in a palace like Tolstoy’s Anna, but the disapproval and isolation she experiences is just as severe.

Katia, meanwhile, accepts the next Bukharian to come along, a nice dull guy who has had a crush on her since high school, who works in a pharmacy, and who satisfied community requirements except that of course rich is better than lower middle class. Her life is rather simple: as her parents wished. Katia’s husband’s only saving feature is that he’s even more obsessed with French films than Anna. Little Katia has no understanding of his interest. The lives of Katia, her husband, and Anna continue to intertwine as the novel progresses. I’m sure you can guess what finally did happen to Anna K.

Food plays a creative role in this novel, as it did in the other Russian-Jewish-New York-immigrant books I’ve recently reviewed (here, here, here). It only took until page 29 to get to “plates of Salat Olivier, vinaigrette, herring, and smoked fish” – in this case served at a fancy French restaurant called Fabergé, beloved by the Russians. The French part? “Bottles of Merlot on the table, the hors d’oeuvres (rather than zakuski) that peppered the lazy Susan, the coq au vin (easily mistaken for roasted kuritza) glistening as the centerpiece.” And on p. 231, almost at the end of the book, Americanization takes the form of “Okra in Baklazhanovaia ikra? Shrimp in Salat Olivier? Chocolate chips in rugelach? Why not?”

I don’t even know all the referenced Russian dishes, but I like the way that Reyn connects foods with multiple cultural experiences – there’s lots more of this. Particularly I liked the way that in a writing class Anna once took, her peer-critics loved her “memory piece” -- but “More ethnic details, the class sighed, more food, more indigenous scenes.” (p. 25) The instructor is an amusing caricature of a not-so-successful writer who teaches others what he isn’t so good at himself. Also, he’s a precursor of David, the writing instructor who is Anna’s downfall. And, we see, according to received wisdom, ethnic-based writing must include food!

Just this week, I’ve read two reviews of yet another book from the Russian-Jewish-immigrant community -- what the New York Times review by John Williams calls “Yelena Akhtiorskaya’s brilliant and often funny first novel, ‘Panic in a Suitcase.’” Will I read it? I don’t know. Maybe I’ve had enough of this genre!
Posted by Mae Travels at 4:10 PM

HI Mae:)
I just took a look at my blog for the first time in I don't know how long and I noticed my sidebar was gone. It's probably because I finally changed the name of my blog to an "official" dot.com, lol...

Anyway, I thought I would drop by to pick up your link to add it and let you know all is well here in PA. I hope all is well by you too.

Anna Karenina is a personal favorite of mine but for some reason I just can't imagine an "updated" version. My dear friend Lester and I read Anna Karenina together over the course of a year many years ago. He was also a playwright. He once wrote a play just for me so I could be the star, lol...

I'm glad you shared your opinion on this book Mae. I do think it may be time for a new genre though:) Just my humble opion, lol...Thanks for sharing, Mae...

P.s. I'm not back to blogging yet until Sunday:)