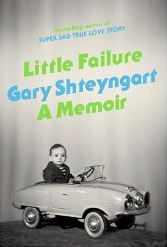 ">Look. Hear. Taste. Smell. Feel." So reads the status line in computer games composed by a pre-adolescent Gary Shteyngart and his best friend. It could be the motto of his memoir, Little Failure. His life is a sensory experience, colorful, buzzing, savory, aromatic. (p. 204)

Shteyngart's memoir describes food constantly. Even in comparison to the other Russian food books I've written up recently, it's amazingly full of observations about what he ate in Russia, in New York, and during his transition on the way. Anecdotes about food -- often very funny-- offer effective support for his presentation of a difficult childhood and complicated later life. Although he was only around 6 years old when he and his parents arrived in New York, his childhood memories are very detailed.

Characterizing his current life as a writer in New York at the beginning of the book, he mentions how he courted "gastric disaster by eating two portions of Wall Street vindaloo." Working on his first novel he had "learned the Irish pleasures of matching gin martinis with steamed corned beef and slaw at the neighborhood dive." (p. 4-5)

About his early life in Russia, he says "The hunger is strong in me. And it is strong for meats. 'Doctor's kolbasa,' a soft Russian mortadella substitute; then, as my teeth grow in complexity, vetchina, or Russian ham, and buzhenina, dangerously chewy cold baked pork, a taste of which will linger on the tongue for hours." He loves sweetened condensed milk: "'Milk, whole, condensed, with sugar' might be the first five words I try to read in Russian." (p. 23)

His memories zigzag back and forth from his present and recent past in New York to his childhood in Russia and his school days in New York. Various events trigger the memories -- a family Thanksgiving dinner, for instance, with "a garlicky, wet turkey... and a dessert made out of a dozen matzhos, a gallon of cream and amaretto liqueur, and a tub of raspberries." (p. 27)

Hunger stalked his past, both his own and that of his grandparents and great-grandparents, who lived in the shtetls of Belarus and Ukraine. In the Ukranian town of Chemirovers, he mentions, "my father's paternal grandfather was killed for no good reason in the 1920s. My father's grandmother was left to fend for herself and a family of five children. There was not enough to eat." (p. 33)  He describes what his mother, his grandmother, and his father fed him as a child -- and how their background included incredible hard times during wars, persecutions of Jews, shortages of food and other goods, and outright famines, even as they migrated to Leningrad, the big city.

He hints at the level of antisemitism his family experienced up until their departure in the late 1970s, as well as at ordinary problems with living in the Soviet Union. Just before they left, his mother was buying ham, and complained more uninhibitedly than usual about being given only fat. The clerk, stereotyping her, says "When you move to Israel they'll slice the ham for you without fat." His mother, in her first "brave and truthful words ... in thirty years of careful Soviet life," answers "Yes... but all you will ever have is the fat." Irony all around, notes Shteyngart. (p. 47)

New York, in contrast offers the adult Shteyngart a meal at "the View, the revolving restaurant of  the Marriott Marquis in Times Square" where he and his parents celebrate his mother's birthday with "something truffled." While eating, his father tells Shteyngart how Russian bloggers dislike his first published novel, insulting him and pretending to be joking. (p. 39)

Shteyngart doesn't spare us the standard memories of terrible-quality Soviet food; for instance, cheese. He includes the standard mention of endless lines: "before yoga," he says, "waiting in line for an eggplant for three hours could constitute a meditative experience." (p. 70) But his memoir isn't just another standard retelling of the immigrant's experience -- I only mention the originality and how I enjoyed it, I'm not going to try to reproduce it. As he describes his childhood and family background, he makes one understand how he became a ferocious patriot of Soviet Russia, and how these feelings had to be overcome as he understood their history and their new reality.

A humorous and remarkably original area is his description of the family's experiences adapting to Western food. Despite the frequency with which I've heard how others did this (both in writing and from acquaintances) I enjoyed the details he chose, such as the Knorr mushroom soup packet they prepare and eat in Rome, first long stop on their journey west and his father's comparison to real Leningrad forest mushrooms in soup with sour cream... "Already the nostalgia." (p. 85)

After a bit of assimilation into Orthodox Jewish New York, he enjoys his father's tale called "Planet of the Yids" where a "Hebraic corner of the Andromeda Galaxy [is] constantly besieged by gentile spacemen who attack it with space torpedoes filled with highly unkosher but oh-so-delicious Russian salo, which is salted raw pork fat, lard, a lumpy cousin of the French suet." (p. 142)

When Shteyngart describes his high school and college years in the second half of the book, there's more about his quests for sex and friendship and about drugs and alcohol than about food. I haven't finished the book: I expect to finish on a plane tonight. So I thought I would write about only what's done. I'm really looking forward to the rest, and will update here if there's something unexpected in the rest of the book -- I don't think I've seen a reference yet to Salad Olivier.
Posted by Mae Travels at 7:00 AM