Joan Nathan at the Book Festival 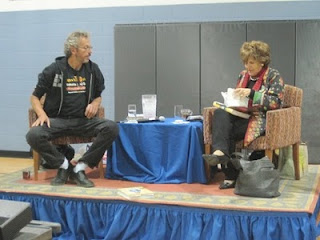 Joan Nathan's presentation this evening about her book Quiches, Kugels, and Couscous was in the form of an interview with Ari Weinzweig, co-owner of Zingerman's Deli. The two have known each other for many years, and are both very effective speakers, so the audience had a feeling of being in a very interesting discussion between two lovers of food. Especially French food. The discussion ranged widely, covering not only the food, but also the history and origins of the Jews of France, their general reticence, and especially their tendency for a long time to avoid discussion of their Holocaust experiences.

The two speakers had a rather detailed discussion of the Jewish quarter of Paris, the Marais, in which Jews settled some time in the Middle Ages. I especially enjoyed their conversation about two delis owned by the the Finkelsztajns -- now ex-spouses. Florence Finkelsztajn -- whose deli both speakers prefer -- gave Joan Nathan a recipe for her pletzel, a type of biali, on which her deli serves a delicious pickeled beef sandwich. I know I've eaten in the Finkelsztajn deli, but I think it was prior to their divorce when there was just one store. I definitely realize that my experience of Paris and my reading on French Jews has ranged widely, but is very out-of-date.

Before tonight's presentation, a local caterer served an amazing buffet of desserts made from Nathan's recipes, including cheesecake and several other cakes and tortes. The book has been available only since last Tuesday, so this must be a remarkable baker. I hope to find an excuse to make some of the recipes soon.

It was most enjoyable.
Posted by Mae Travels at 9:24 PM