What did Cleopatra Eat? 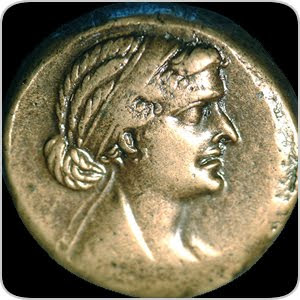 Cleopatra, the most famous queen in history, was proficient in several languages and at least two cultures. She traveled throughout her Egyptian kingdom and went to Rome and other places to advance her dynastic and personal interests.

Cleopatra's first identity came from her ancestors, the Ptolemys: kings and queens of Egypt, descended from a Macedonian general in the army of Alexander the Great. They had ruled Egypt for around 300 years when Cleopatra was born, and always maintained a strong connection to Hellenism -- the Greek culture that Alexander had spread with his military successes, even inventing a synthetic god that combined both Greek and Egyptian god-like qualities. So Cleopatra's first two cultures were Egyptian and Hellenistic Greek.

Further, when Cleopatra was a young queen, Julius Caesar was creating a new empire for Rome, conquering new territories throughout the Mediterranean and Europe. After Julius Caesar's assassination, Mark Anthony became the next Roman conqueror. Cleopatra's sexual conquest of both of these heroes is what she's best known for. Of course.

I was wondering how this multi-cultural experience combined with the incredible wealth and status of an Egyptian queen to result in interesting dining experiences. In one story about her, Pliny says that she dissolved a valuable pearl in a glass of wine and then drank it to demonstrate the extravagance of her hospitality. This isn't cuisine. Several of Cleopatra's Ptolemy forebears were known for their love of eating -- to the extent that they were vastly obese. Much else that one can learn is only generalization. What products were grown? Which were valued highly? What did various customary dining conventions dictate? But I found a few specifics.

Dates from the date palms that grew near the Dead Sea were considered to be the best in the Roman world. During the same era of Roman conquest that brought both Caesar and Mark Antony to Egypt, Rome had begun to dominate Palestine, which was ruled by their client King Herod I. One of Cleopatra's political moves was an attempt to rule the nearby coastline of the Middle East -- she asked to be made queen of the entire region.

Flavius Josephus, the Jewish historian, described how Antony made King Herod give Cleopatra his date groves and farms producing sweet balsam, but that he was responsible for managing them and paying her what was due:

When Cleopatra ... accompanied Antony in his expedition to Armenia as far as Euphrates, she ... passed on to Judea, where Herod met her, and farmed of her parts of Arabia, and those revenues that came to her from the region about Jericho. This country bears that balsam, which is the most precious drug that is there, and grows there alone. The place bears also palm trees, both many in number, and those excellent in their kind....

But then, as to the tributes which Herod was to pay Cleopatra for that country which Antony had given her, he acted fairly with her, as deeming it not safe for him to afford any cause for Cleopatra to hate him. (Josephus, Chapter 4)

Surely we can assume that Cleopatra enjoyed eating the greatly prized dates from these orchards that were her own property.

In the matter of wine, the Ptolemys and many immigrant Greeks who had accompanied them to Egypt had added Greek-style vineyards and many other crops to those already grown in the fertile Nile valley and other parts of Egypt, which was far less arid than it is today. Near Alexandria at Lake Mareotis, a highly productive agricultural region yielded a particularly nice wine that was a favorite of Cleopatra, said the Roman poet Horace. Various writers described this wine. Athenæus mentioned that Mareotic wine was "white, its quality excellent, and it is sweet and light with a fragrant bouquet; it is by no means astringent, nor does it affect the head." Virgil said the grapes themselves were white, and Strabo said the wine aged well. Grain, olives, and other fruit were also cultivated in this region, and probably contributed high-quality foods to the royal kitchens.*

The author Lucan (born 39 C.E. -- thus writing around a century after the events he described) wrote in Pharsalia; Dramatic Episodes of the Civil Wars about Caesar and Cleopatra. He included a long description of a banquet which she gave to overwhelm his senses. Among a plethora of details about the physical surroundings, the queen's garments, and "her luxuries, as yet unknown To Roman fashions" are a few hints about the food; in particular, Lucan makes clear that authentic superior Roman wine was preferred to the local vintage: "no juice of Mareot grape But noble vintage of Falernian growth Which in few years in Meroe's vats had foamed, (For such the clime) to ripeness." He also mentions

"On plates of gold They piled the banquet sought in earth and air And from the deepest seas and Nilus' waves, Through all the world; in craving for display, No hunger urging. Frequent birds and beasts, Egypt's high gods, they placed upon the board: In crystal goblets water of the Nile They handed."

Unfortunately, this really doesn't help much. They ate gods? Really. Well, the Egyptians did worship a lot of animals, including fish, mice, crocodiles, and bulls, and their gods often took animal form or had animal heads with human bodies. The Romans found this animal-worship odd -- Roman gods were always human in form. Cleopatra herself went around dressed as Isis, and statues in her likeness were worshiped in temples to Isis.

Plutarch, also around a century after the fact, mentioned eight wild boars being roasted, among other extravagant preparations for only 12 guests at a banquet that Cleopatra was giving for Antony; Plutarch said his grandfather had heard the story from an eye-witness. The still-later classical author Athenaeus wrote quite a long passage about a banquet that Cleopatra gave for Antony, but he didn't name a single specific food -- just talked about the gold dishes and Ethiopian slave boys she handed out as door prizes.**

Cleopatra's suicide is another very famous part of her legend. Her last meal, according to Plutarch, included a basket of figs from the country. And beneath the figs and fig leaves in the basket lay the asp, which she had asked for. Or maybe the asp came in a water jar. This account leaves many open questions, but in any case, that's the end of the story.

So on to the generalizations -- what was available to the richest of rich Egyptians at that time? Scholars have found a few texts establishing elaborate meals, based on tombs where food was provided for a high-status afterlife. Perhaps they give a clue to what the Egyptian queen might eat. Here is one such list of food for a dead woman in ancient times: "a triangular loaf of bread of emmer wheat ...; an unidentified liquid containing some sort of fatty substance; cooked fish; pigeon stew; cooked quail, dressed with its head under one wing; two cooked kidneys; the ribs and legs of beef; a dish containing cut beef; stewed figs; fresh nabk berries; small round cakes sweetened with honey; three jars of some form of cheese; wine."

In ancient Egypt, along with sacred grain priests ate beef and goose from sacrificial animals. Those who could afford more than grain porridge or bread also ate dairy products from sheep and cattle, fruits like pomegranates and figs, other meats, honey from dates, and wild lotus and fish from the Nile. They drank more beer than wine, but probably had both. A list of foods eaten in pre-Hellenistic Egypt adds: filberts, walnuts, pine kernels, olives, peaches, Indian medlars, quinces, pistachios, lentils, and radishes. Roasted papyrus was another delicacy. Cleopatra could have had the opportunity to enjoy such foods.

During the Ptolemy era, new, improved, or expanded crops included sesame, poppy seed, cabbage, lettuce, garlic, chick peas, and cumin, as well as "figs, walnuts, peaches, apricots, plums and olives." The greatest change was in a new type of grain: instead of emmer wheat and barley, the Greeks expanded cultivation of a different type of wheat that they found more desirable for bread. Most of the changes affected cash crops, which enabled Egypt to become a highly profitable breadbasket for Rome; however, the foods that were available give a hint about what Cleopatra could have eaten in Egypt during most of her life. (Lists from Crawford, p. 138-140)

During her long stay in Rome at Caesar's estate in Trastevere, Cleopatra would have lived at least as well as a wealthy Roman, and no doubt eaten the types of foods documented in the many sources about Roman dining and banquets -- especially the many books about the recipe collections of Apicius. This is a subject with a huge literature, so I'm not going to repeat it. Like everything about Cleopatra, what she did in Rome is only known through the speculation of scholars.

* I acquired these citations from various online articles about Cleopatra and Lake Mareotis. The quotes from Flavius Josephus and Lucan come from the Project Gutenberg editions of their works. Other information comes from Cleopatra: Last Queen of Egypt by Joyce Tyldesley; "Food: tradition and change in Hellenistic Egypt" by Dorothy J. Crawford; and Food and Society in Classical Antiquity by Peter Garnsey.
** Athenaeus of Naucratis. Yonge, C.D., Editor. The deipnosophists, or, Banquet of the learned of Athenæus, volume I, p. 239.
Posted by Mae Travels at 12:01 PM

Labels: Posted in 2010, What did historic figures eat

I had heard of the basket of figs but had no idea there was such a cornucopia of delights at her fingertips.

I do remember coming across a notation that she made lemons very popular during her time because she used them as a face wash. Also, there is suppose to be a Mandarin Orange named in her honor...

Thanks for sharing, Mae.

Wishing you and yours a tasty and memorable Thanksgiving. Louise

P.S. I'll be saving this link for a future post:)

Good to hear from you, Louise.

The history of citrus is really complicated -- the food timeline website says mandarin oranges arrived in Europe in 1805, and even ordinary bitter and sweet oranges were far later than Cleopatra. No reason they couldn't have named a variety for her, though.

Lemons were earlier than oranges (3rd cent) but not early enough for Cleopatra's complexion! Citrons were known in the Mediterranean in her time.

THis is fascinating. Equally fascinating to me is how in the world you find time to do this research?! Is it part of your day job?There's a lot of study here and it's so beautifully written. I always learn something new when I visit you, but this time I'm on overload! It's fascinating and worth reading again, more slowly to savor~