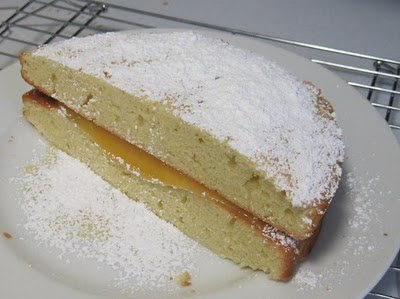 I recently read in the Atlantic food section about the famous Victoria Sponge cake. The cake featured in an article by Tejal Rao about the even more famous Victorian cookbook Mrs. Beeton's Book of Household Management. The article describes the Victoria cake recipe from the book:

Beeton originally documented the recipe as a perfect 4:4 ratio of a baker's go-to ingredients: butter, eggs, sugar, and flour. Most English cooks still follow that guide, as do many non-English cooks, because the Victoria Sponge is England's most well-traveled cake, visiting her old colonies and never leaving. It still turns up at boarding schools in Kenya and home kitchens in India, and other places too. As a girl guide in England, I had to bake a Victoria Sponge for a stranger and serve it to him with a pot of tea to acquire my hostess badge—which they've since retired or renamed, I imagine.

The technique of weighing eggs and then using equal weights of the other ingredients is one I had heard of but never tried. This time, I decided to do the experiment -- as there are only two of us, I started with two, rather than four eggs. I weighed butter, sugar, and flour; creamed the butter and sugar; added the egg, then the flour; and baked my single layer in an 8 inch pan. It took a little longer than the 25 minutes in the recipe, which did not specify pan size. Although I had raspberry jam, which the recipe suggests, I used lemon curd between the layers.

Not-so-Victorian tricks: I softened the butter in the microwave oven, and used my electric mixer for beating the cake. My oven has a thermostat and an on-off switch, which no Victorian oven had. Also a modern advantage: I cleaned up with running water and a dishwasher. Eat your heart out, Mrs. Beeton.

We ate the cake for dinner, with tea. It's a dense cake, and tasted good. It's true: we had nothing but cake for dinner. How nice.
Posted by Mae Travels at 6:33 AM

Have I been blog-lazy this long? What I have missed! This looks really terrific -- Oh, dear -- I want it now!