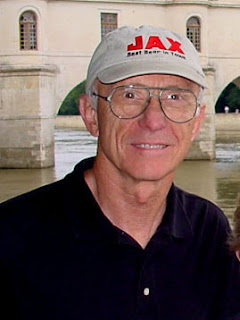 John Chapman, shown in the photo, is a friend of ours, and a physicist. Everyone calls him just "J" -- you will see why in a little while.

J's great-great-great-grandfather Frank Chapman was a seed farmer. He grew seeds and dried them to sell to other farmers to plant and grow crops.

Frank was born in Massachusetts. After he grew up, he moved to a new farm in Maryland. Frank had a brother who sometimes came to visit him in Maryland. His brother's name was John Chapman, just like our friend.

The brothers Frank and John Chapman lived a long time ago, when the American land was being turned into farms called homesteads. Farmers wanted to plant good things on their new farms. One of these good things was apple trees. John Chapman sometimes got apple seeds from his brother Frank's seed farm. He planted apple seeds on his own farms, and sold young trees to these homesteaders.

You can probably guess what everyone called John Chapman? He was known as Johnny Appleseed. The J. Chapman we know calls him Great-great-uncle John. The stories about Johnny Appleseed start on the frontier in the year 1797. (He lived from 1774 to 1847.) 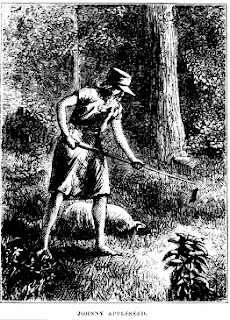 During Johnny Appleseed's life, a lot of people were moving west from places like Maryland and Massachusetts. Frank's family moved west too. They kept on working as seed farmers, selling lots of kinds of seeds so that other farmers could plant crops. Our friend J's great-grandfather -- Johnny Appleseed's nephew -- lived in Indiana. He was also a seed farmer and also named Frank. Sometimes Johnny Appleseed came to see his nephew in Indiana.

Many of the stories about Johnny Appleseed are true: throughout his life he traveled around, planting apple seeds, growing little trees, and selling the little apple trees to homesteading farmers. Johnny Appleseed didn't live in just one place, and he liked to wear old clothes. He made money, but he seems to have given it to people that needed it. He helped a lot of people. If he visited a farmer, sometimes he planted some apple trees or some seeds to say thank you for a good breakfast or dinner and a place to sleep. He also knew a lot of Indians who lived on the frontier, and he was their friend too.

March 11, the date Johnny Appleseed died, is celebrated as Johnny Appleseed Day. I posted this information a few years ago on my children's story blog, so it's a simple story. If you want a complicated version, see Michael Pollan's book The Botany of Desire: A Plant's-Eye View of the World.
Posted by Mae Travels at 12:01 AM

Great story! I enjoyed reading it!

What an amazing post, Mae. So cool...I'm so glad I didn't miss it!!! I'm going to have to grab this link to include on my March weekly food days. (I haven't been able to figure out how to create a link at the bottom of the post so I'll do it manually) Thank you so much for sharing...