"Jewish Chop Suey... is our own name for a mixture of diced scallions, cucumbers, radishes, tomatoes, hard boiled eggs, and whatever else you like mixed with heavy sour cream." -- from Modern Kosher Meals by Mildred Bellin, 1934, p. 27.

"Farmer's Chop Suey: No one knows how this simple dairy salad came to be, but it has been a hot-weather favorite in Jewish-American kitchens for at least a century. Served with good pumpernickel or rye bread, it is a light, satisfying summer lunch." -- Blue Plate Specials by Jane and Michael Stern, 2001, p. 137 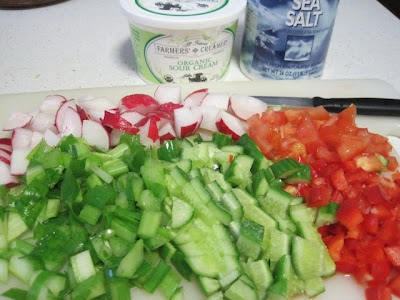 Similar recipes for the same salad, under the name Farmer's Chop Suey, appeared in The Jewish Sentinel Cook Book in 1936, and in Love and Knishes in 1956. "Our family made it with cottage cheese," said my cousin Merilyn. "I remember my mother making it," said my brother-in-law Jack. Both were thinking of the 1930s. My parents ate chopped vegetables with cottage cheese and sour cream too, but I never heard that name for it.

Why would this obviously Eastern-European dish acquire a name like "Farmer's Chop Suey"? Its only resemblance to standard Chop Suey is that there are chopped vegetables.

I heard of Farmer's Chop Suey while working on a talk I'm going to give next month titled "Who won the war between gefilte fish and chop suey?" It's about the popular topic of Jews and Chinese food, subject of various jokes, wisecracks, Yiddish puns, recipes, cookbooks, and annual articles about eating Christmas Dinner in a Chinese restaurant. My interest is in the interaction of two immigrant groups in America: the Jews and the Chinese, and in general in the history of Chinese food in America.

The book Chop Suey: A Cultural History of Chinese Food in the United States by Andrew Coe describes the origins of his title food -- contrary to popular impressions, the dish wasn't a joke played by the Chinese on Americans, but an honest reinterpretation of Cantonese home cooking. It was native to many of the early immigrants, and eventually adapted to the taste of American restaurant goers. Its popularity came and went for around 100 years. In the 1890s eating Chinese food was a sign of modern adventurousness. During prohibition, Chop Suey Houses offered live music and dancing -- alcohol had never been integral to Chinese food so it wasn't missed.

As a side effect of this popularity, all kinds of dishes became "so-and-so's Chop Suey." There was "Polish Chop Suey," "Italian Chop Suey," "American Chop Suey," etc. These were ethnic dishes that hardly resemble the Chinese dish. No one claims to remember exactly when or how a traditional Jewish chopped salad acquired the name "Jewish Chop Suey" or the maybe politer name "Farmer's Chop Suey," but it doesn't seem hard to imagine. But the existence of this dish speaks to the early adoption of Chinese food into Jewish life.

The 1934 book Modern Kosher Meals by Mildred Bellin included a wide variety of non-Jewish ethnic foods, as well as traditional ones. I mentioned the recipe for "Jewish Chop Suey." She also gave a recipe for standard Chinese Chop Suey, including soy sauce and water chestnuts; and one for "Chinese Soup," which is egg-drop soup. She wanted her readers to keep kosher without being old-fashioned; Chinese food was familiar enough for kosher cooks to want to make some at home. Adaptations of non-Jewish foods appear in many kosher cookbooks -- there are even a few exclusively kosher Chinese cookbooks, just as there are surprisingly many kosher Chinese restaurants. It's an interesting subject.

Maybe one of the strangest references to Farmer's Chop Suey is in the narrative of an elderly woman about a subject that fascinates some people: the death of the world-famous Houdini. The author was the widow of Dr. Daniel Cohn, who treated Houdini in a Detroit hospital during his last illness. Years after the event (which occurred in 1926) she wrote:

"Houdini told Daniel he was born in Hungary and was brought to the U.S. by his mother whom he adored all his life and his father, a rabbi. They settled in Appleton, Wisconsin where he and his siblings were raised.

"One evening while talking about his favorite foods, he said, 'I have a yen for Farmer's Chop Suey.' Farmer's Chop Suey, a dish familiar to most Jewish families, is made of chopped raw vegetables combined with sour cream. Daniel walked to a nearby delicatessen, returned with two portions and while they were eating, Houdini reminisced about his life. 'If I die, ' he said, 'don't be surprised if phony spiritualists declare a national holiday!' His disagreements with spiritualists had taken the form of many public battles." -- From "Houdini and My Husband"

In short, 75 to 100 years ago the identification of a Jewish dish as "Chop Suey" probably was one of many indications of widespread Jewish interest in Chinese food. The increasing frequency of Jews eating in Chinese restaurants reflected Jewish assimilation into American life and American foodways. While some Jewish leaders found the trend away from Jewish and kosher food alarming, by 1928 when a Yiddish journalist wrote an article titled "The War Between Chop Suey and Gefilte Fish" it was probably too late to do anything about it.
Posted by Mae Travels at 12:01 AM

Who knew? Not me -- this is fascinating! Thanks -- I'm forwarding your link to a couple of foodies I know!

And P.S. -- the rollo/pretzel thing -- that could be SUCH TROUBLE!

I LOVE this post Mae! I have never heard of Farmer's Chop Suey and the notion of the Jewish love of Chinese food just boggles my mind. Quite fascinating. I'd love to be in the audience when you give "your talk."

Thank you so much for sharing. How I wish I had the time to delve into this morsel further...

P.S. I'm saving this link for my Houdini post in October, Thanks!!!

Just wanted to say thanks for your blog, and the info about Jewish Chop Suey. My mom made it the way her mama did in the "old country" -- with just cottage cheese, sour cream, chopped radishes and scallions, and salt & pepper. Simple, but delicious and it brings back so many memories! BTW her older sister's name was Mae Hartman; she lived to be 100 and my mom lived to be 96!

I looked this up as I was eating my version of it, which includes tomatoes and cucumber, essential ingredients, and cottage cheese rather than sour cream. It may be a matter of individual taste. I had some idea in my mind that farmer's chop suey originated from the Farmers' Market in Los Angeles, so it was interesting to read how far back in Jewish culinary history it goes.

we always had Farmer's Chop Suey during the summer before there was home air conditioning. My mom made it with cottage cheese, sour cream, radishes, peppers, green onion and cucumbers. I've never heard of hard boiled eggs being in it. Cherry tomatoes sounds like a wonderful addition.
velveteyes35

I have been eating Farmers Chop Suey since I was a kid. My grandmother made it. She said it was called Farmers Chop Suey because it was originally made with farmers cheese (when she was a girl in Racine, WI) a dry form of cottage cheese. Oh she always put a dash of Worchestersire Sauce in it.

Fascinating how every family had a version AND an explanation of the name. But not all alike.

My Aunt used to make this in the Summer over 50 years ago in Joliet, Illinois - she always called it Farmer's Chop Suey and there was never any reference to the Jewish ethnicity of it - altho that surely may be the case. She always used Cottage Cheese with diced & sliced Cucumbers, Radishes, Green Onions and Carrots - and - after trying to re-make it over 50 years later, I found that she did, in fact, use a "secret ingredient" (Sour Cream) to make it creamier………….

I think of Farmer's Chop Suey every summer, though I haven't eaten it for years. It was my mother's dinner-of-desperation to feed her Jewish-American family on those hot summer nights in Cleveland, Ohio, late 1940s-early 1950s. Her recipe was sour cream, radishes, celery, cucumbers, tomatoes, and maybe some chopped green pepper. I hated it. The only consolation was dinner came with fresh corn on the cob and delicious soft onion rolls. Like buttermilk, I couldn't believe how anyone could actually like sour cream. Many years later those are two of my favorite things.

A quick aside. Like most Jewish families, we loved Chinese food. It was a rare treat to go out for dinner. When we did it was usually to Chin's Kin's Lee (at Kinsman and Lee Roads), built like a pagoda. My mother always ordered Breaded Veal Cutlet from the Western side of the menu. For years I assumed she didn't like Chinese food, to later discover she did. My father didn't like breaded veal cutlet; that was the only time she could have it.