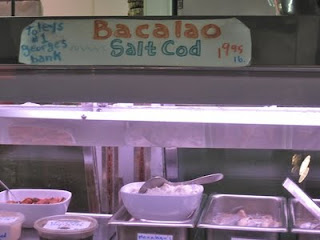 Today I stopped at the fish market in Kerrytown, where I had eaten lunch at the notorious (?) Community High hang-out, the Kosmo Deli. Since I've been reading Kurlansky's Cod, I was interested to see that the market offers salt cod -- also called Bacalao. This item that was once the cheapest and least desireable seafood now costs more than most high-quality fresh fish -- $19.95 per pound. To think that they once fed it to the most maltreated people I have ever read about: the slaves on the Caribbean sugar plantations. I have never tried any of the various dishes that can be made from salt cod. 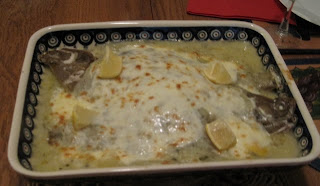 At the market, I bought two flounders, which I believe came from the waters off Maine. (I think the flounder filets, nearby in the fish case, were from the Georgian Banks, once source of seemingly inexhaustible cod schools. Now the cod are nearly extinct, according to the book.) For dinner I baked them in a white-sauce based on white wine, flavored with fines herbs and lemon, and garnished with a bit of cheese on top. Very delicate.
Posted by Mae Travels at 7:14 PM

Some time you should have lunch at Monahan's - the mussels are wonderful as are the fish and chips. I want to try the other things there, too, but haven't so far.

In the large Portuguese markets not far from us in Fall River, Massachusetts, bacalhau (or baccala) is inexpensive, perhaps because it's a staple of the diet here. I do hope you'll try it; though labor-intensive because it requires 24-hour soaking, it's really delicious.

OK, Lydia, I hope you'll do a Perfect Pantry post about this formerly common -- now exotic -- ingredient. Or I could try one of Kurlansky's recipes.