The author of A Bitter Feast, S.J.Rozan, spoke at the Jewish Book Festival this week about her latest book. I asked if any of her books had a food theme, and she recommended A Bitter Feast, starring her detective Lydia Chin, American-born daughter of Chinese immigrants. 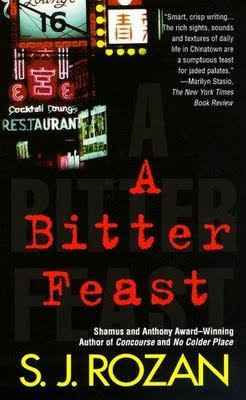 Chin, a private investigator in her native China Town in New York, begins with a case involving attempts to unionize workers in a palace-like Chinese restaurant, the Dragon Garden. As the plot becomes more and more complicated, Chin eats elegant Chinese food, American deli food, home-cooked meals made by her mother, and appropriate tea snacks supplied by the various shady community figures that she interviews. She also shops for food to help her mother, who is aging.

For a while, Chin disguises herself as an immigrant and works as a Dim Sum Lady pushing carts of food around the Dragon Garden. She describes the preparations: "the chefs' assistants loaded us up with dumpling-filled bamboo steamers and plates of turnip cakes and upside-down glass bowls holding mounds of eight-treasure rice." (p. 123)

For the final scene, she plans to entrap the man suspected of various crimes. He agrees to meet her at another restaurant, so she arranges a six-course Chinese banquet, starting with a cold platter and ending with fried bananas (p. 270) The day of the banquet, the restaurant owner assures her that he's obtained the freshest of sea bass. Before Chin and her quarry get to taste any of it, an unexpected ambush and shootout bring the investigation to a close.

Finally, having solved her case, she accepts an invitation from her investigator-partner Bill Smith: he cooks her an American meal. The last sentences of the book: "The tomato-glazed meat loaf filled the room with savory scents. Bill began tossing the salad with a dark dressing full of herbs, and I started to look forward to dinner." (p. 308)

A very foodie book indeed. Beginning to read it this morning helped propel me to the Asian market where I shopped this afternoon -- see Reading about Chinese food makes me want some and Chop Suey and Chinese History. Rozan's new book also sounded very interesting, and I plan to read it eventually.
Posted by Mae Travels at 9:36 PM

It is extremely interesting for me to read that article. Thanks the author for it. I like such topics and everything that is connected to this matter. I definitely want to read more soon.