A few highlights from Iceland

Our voyage, titled "The Edge of the Arctic," began in Iceland with a visit to the National Museum, which we found quite fascinating. The first people to inhabit this island seem to have been the Vikings, who arrived in the 10th century of this era. In other words, very late in human history. I enjoyed the artifacts from the early history of the settlements.

After the museum visit and a brief ride through the city, we boarded the ship and immediately (as prescribed) participated in the life boat drill. For the first time on any Lindblad voyage, we actually went into the life boats and practiced the whole drill. 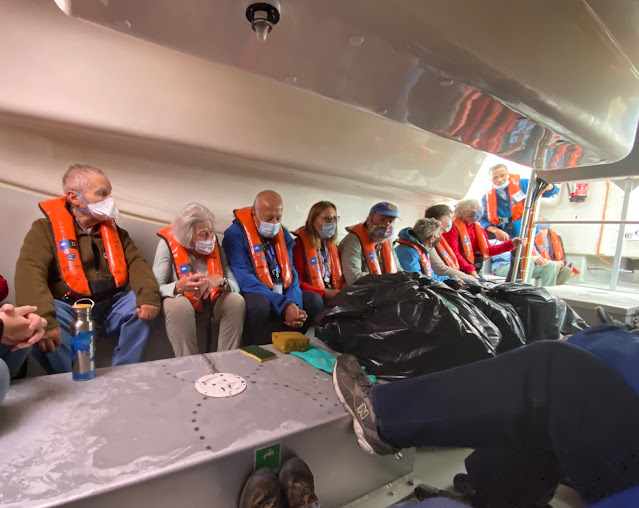 Finally, we were ready for the ship to leave the harbor of Reykjavik. Several of out activities in Iceland were repeated from last year — though very well worth a second look! Most of the days were spent outside seeing wildlife and scenery, but in this post I'm featuring some of the other highlights of the trip.
One new place was the Arctic Fox Center, where photos and stuffed birds and foxes and other historic items are on display, along with materials about the lives of the arctic foxes in Iceland. More fun though: the center houses two young foxes that were orphaned by farmer-hunters in the area. Icelandic farmers have permission to shoot foxes.
Another highlight was a performance by a much-loved Icelandic singer named Hafdís Huld, who had several number-one hits in Iceland in the early 2000s. She mainly performed ballads and sweet songs that were pleasant to the audience on the ship.
We enjoyed visiting several other sites on the west coast of Iceland before heading toward Greenland, a 36 hour journey across the Straits of Denmark. Luckily the seas were very calm, and we stopped to see some whales that were not far off the ship's bow -- not the last whales that we saw on our trip.
This post tells about the quiet part of my trip. The more invigorating outdoor hikes and rides in small boats among the icebergs, fjords, and glaciers are still to come!
All photos and text © 2022 mae sander.

I see everyone still masked up for the lifeboat drill. Was that for all the time on board? How large is the fox population?

Sounds like an interesting, fun time! Cute fox, too.

Hello,
What a lovely look at your trip and visit to Iceland. I like the cute lighthouse and the art exhibit. I have never had the drill that goes into the lifeboats, that seems different. The young fox is cute. A wonderful post on your trip. Have a great weekend.

I share your posts with my husband and he asked, why don't we go on cool trips like this. Love your posts and thank you for taking us along!

Glad you shared your Iceland trip with us; my sun would like take his family there at some point.

I thoroughly enjoyed the National Museum. That 11th century carving was rather quite barbaric, but I loved it.

I take it this is an ocean cruise as opposed to a river cruise you took last year when you traveled in the western part of the states on the Columbia and Snake rivers.

I think it's wise that you actually participated in a life boat drill. I think it's important. How many people on an airplane actually listen to the flight attendant tell where the exits are?

Loved seeing the cute fox and its handler. Nice to be entertained by a famous Icelandic singer.

Mae,
Thanks for sharing your travels to Iceland. Everything looks so interesting. Great you've been able to travel.

Mae,
Thanks for sharing your travels to Iceland. Everything looks so interesting. Great you've been able to travel.

Cruise boats leave out of Galveston, which is very close to me, but we've never been on one. It seems like an excellent idea to practice getting off the boat before doing that in an emergency.

There's a feeling of aliveness in that 16th-century statue. It's something in the eyes and in the outstretched arm.

I'm looking forward to hearing more about your trip.

Oh your trip appears to be wonderful. Iceland... Gosh, I think I'll have to add it to my bucket list.

Glad to hear you had such a fun time.

Have a good week ahead!

That sounds amazing. I enjoyed Iceland when I visited. I didn't do anything that you did - maybe when my son is older we need to return! We did try whale watching. Didn't see any whales and were caught in a horrendous storm!

Have a great week!

Wow those statues are so cool I'm surprised I never saw them before. My son was asking if one of the pics was a kangaroo..adorable.@theglobaldig.blogspot.com

I can't wait for more! Love the fox center and the photo of folks in their orange jackets. The singer sounds like something I'd like. Welcome home. (Aiming for October in Chelsea?)

When I was in Iceland I wanted to visit the NAtional Museum. We arrived at 4:30 and they closed at 5, so I didn't visit. I think my husband and I are going next spring, since I went with friends originally and he would like to go. I hope to get there. Especially since I have a mini version of that Viking statue you showed in one of your photos. Happy weekend Mae. hugs-Erika

I have a friend who is currently in Iceland. Looking forward to hearing more about your trip.

Iceland is such a popular destination these days. My daughter was there last fall and my brother took his whole family earlier this year. They all had a wonderful time and all the photos were spectacular!

Thanks for sharing your adventures, so cool!

This is lovely ! I don't really like traveling, so this is great to enjoy your trip!

Sounds like a wonderful time! Iceland is really magical. I was there about 10 years ago and would love to return one day. Looking forward to hearing more about your travels and seeing more pics!