"Save Me the Plums" by Ruth Reichl 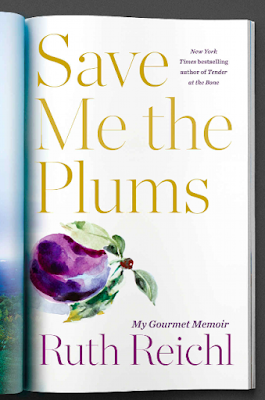 Ruth Reichl's writing is irresistible. Although her admiration for herself and her accomplishments is justified, and she's convincing about what a remarkable writer, reviewer, editor, and manager she has been, I still find her well-presented ego just a little hard to take. I'm sure she's right that she did a remarkable job of recreating Gourmet magazine, and that the publisher Si Newhouse was wrong to suddenly discontinue publication.

Maybe it's not really name-dropping for her to describe all the famous writers whom she persuaded to write for Gourmet. Maybe she's not showing off by describing a trip to Paris with the Gourmet staff when they stayed at a different luxury hotel every night.

Maybe it's not really snobbish to list numerous famous restaurants in New York where she had once written reviews for the New York Times, and to tell how as editor of Gourmet she ate there with the rich and powerful people who were part of her job. Or to tell how the chefs all worshipped her, and the limo driver begged her to call on him again.

Maybe it's not really egoistic to tell how she fulfilled all her mother's wishes to eat in the most expensive and opulent places in New York. And to belong there as her mother wished to do. I've chosen the following rather long passage to illustrates Reichl's very skillful way of entwining her past as an ordinary kid, her Gourmet experience as one of the highly esteemed leaders of New York, and the atmosphere of one of the most famous and exclusive dining places in the city. Ultimately, what she shows most effectively is how Ruth Reichl is the greatest --


WALKING INTO THE Four Seasons, I couldn’t help thinking of my mother. For months before the restaurant opened in 1959, Mom pounced on every single word written about the luxurious new establishment. “It’s called the Four Seasons because it’s going to change with each season,” she informed Dad and me. “Not just the menu, but the entire décor will be redone every three months!” She regaled us with breathless descriptions of the interior, designed by Mies van der Rohe and Philip Johnson, describing in minute detail the dramatic Richard Lippold sculpture hanging above the bar. “It’s supposed to look like bronze icicles,” she said. But what intrigued her most was the famous Picasso curtain....

While Mom and Dad nibbled nuts and nursed martinis, I enjoyed the city’s most expensive glass of orange juice. But a single drink, no matter how slowly you sip, can last only so long. Mom sighed when Dad asked for the check, looking wistfully around: She longed to stay for dinner.

Still, the restaurant’s spell stayed with Mom as we dined on fifty-cent sausages down the street at Zum Zum. Grateful for her continued happiness, Dad picked up her hand, wiped away a spot of mustard, and kissed it. “Someday,” he promised, “I’ll take you to dinner at the Four Seasons.”

Sadly, he never did. Now, entering a room that still radiated power, I tried seeing it through my mother’s eyes. It was not, I realized, a dining room: It was a kind of living theater.

I surveyed the captains of industry seated with such easy arrogance at their capacious tables: None of them had come to eat. They were here because they could be seen but never overheard. They were here because the light in the room made everyone look better. They were here to bask in the obsequious sarcasm of the owner, Julian Niccolini, an elegantly attired Tuscan with saturnine good looks, who made sure that meals for these extremely busy people never lasted too long. They were here because no annoying check was ever presented; when lunch was over they simply strolled off. (How Mom would have loved that little detail!) They were here, ultimately, because everybody else in their world was here too. (pp. 134-136). 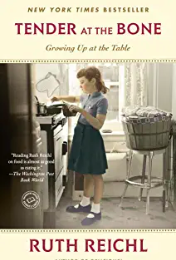 Save Me the Plums is a book about how the world of these incredibly powerful, rich, beautiful, and successful people became her world -- at least for a while. And how she deserved it. 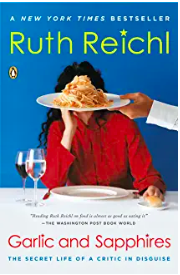 I've read Reichl’s three earlier memoirs. I liked Tender at the Bone very much -- it was the first I had heard of her. I loved Garlic and Sapphires, especially because I attended her presentation on a book tour promoting it; she spoke at the original Borders Books. (Later a chain, it was founded here in Ann Arbor, and attracted very good authors in the old days of book tours).

I hesitated to read Save Me the Plums. I was afraid it would be too egotistical. I guess it was, but I couldn't miss it. Maybe the most surprising thing is how much she talked about her mother again -- as she had in Tender at the Bone.

I confess that I was not a reader of Gourmet during her tenure as Editor in Chief there. In the book, when she talks about the readership of the print magazine as she pictured it, I feel that I'm probably not the type of reader she wanted. However, I did read Gourmet's online site, and I enjoyed her description of the struggles she and her staff had to create that website which seemed to be kind of a step-child. Maybe this disqualifies me to review her book. Maybe not.

All content in this post is written and copyright © 2019 by Mae E. Sander for maefood dot blogspot dot com. If you are reading this at another blog, it's been stolen.
Posted by Mae Travels at 6:30 AM

I haven't read any of her books...she seems like a very interesting author.

Super review. Reichl is an excellent writer and knows her stuff about food. But.

And this is a big but.

Much as I liked many of the changes she made to _Gourmet_ when she took over, I really think over time the magazine declined under her watch. I just came across a bunch of the magazines from the 80s and 90s that I thought I had gotten rid of long ago. They're gone now, but before I recycled them I had fun glancing through them. The magazine was largely better then. I do like some of the social consciousness she injected into the magazine, but the whole thing became kind of "look at me" rather than "here's some good stuff you can make to eat; or some great places to find wonderful food." Which is what I prefer. Still, I really miss that magazine.

I listened to this on audio and it felt like she was telling me stories. I liked it a lot.

It seems a very interesting book to read, and I appreciate your honest review. Gourmet is legendary and her influence absolutely legendary.

I haven't read this one but have read the other two you mentioned. Fairly recently I read an interview with Ruth and there were undertones that I thought, is she bitter? It was the way the questions were answered.

I have enjoyed her previous books but this one isn't on my short list. So many books on that list!

Mae,
I'm not familiar with this author, but from your review of her books I'm sure I would enjoy reading them. Now the question is which one to start..

I loved Gourmet under her leadership and was very sorry when it closed up. Considering the circumstances and no warning, I don't doubt she's bitter. I still like her.

I have this one sitting on my TBR stack. I am a fan and will read anything she writes. ;-)

She may be egotistical, but all in all a very entertaining writer. I've enjoyed every one of her books.

This one’s waiting for me at the library. Looking forward to it. Cheers

isn't that funny? i can't say i ever really noticed that ruth was egotistical:) if she is, i didn't notice and clearly didn't mind. I just think she is a fab writer and cook! When you say - in the old days of book tours, do writers not do them anymore? they are a big thing here, and of course there are lots of writers' festivals hence lots of writers around and giving talks. cheers sherry x

What can I say? I am an uber fan so I love most everything she does. I totally see you POV but I think by the end she was just as distressed over her luxury lifestyle. I enjoyed your review, Mae.