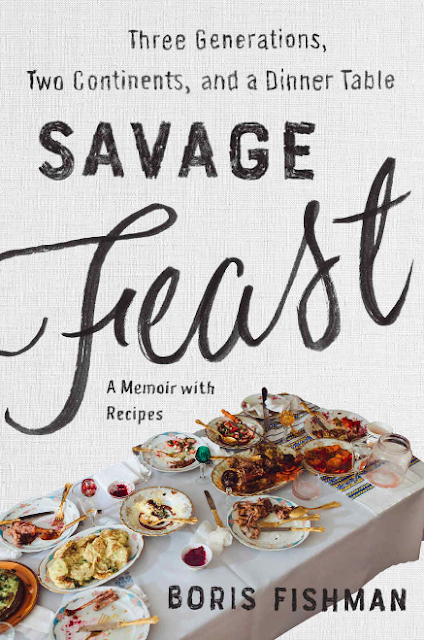 Boris Fishman's latest book, published last February, is Savage Feast: Three Generations, Two Continents, and a Dinner Table (A Memoir with Recipes). It has quite a few themes and characters in common with his autobiographical novel A Replacement Life -- tormented Russian immigrants in New York, fraught family dynamics, Jewish guilt, and mountains of traditional Russian food. (I reviewed it a few years ago -- link.)

The new book has more food and guilt, fewer Russians, and far less of a plot, though there is some character development of the author (narrator), including a lot of details about his struggle with clinical depression. I enjoyed it but I don't have much to say about it. My favorite food passages in the book are almost stereotyped, but not quite:

"My grandmother didn’t know how to set the table for our guest— would Soviet food seem paltry next to the glories to which this former countrywoman now surely had access in American supermarkets? ... In times of uncertainty among kinspeople, lean on the Jewish regimen. Dill-flecked chicken bouillon with kneidels (matzoh balls, from matzoh baked and delivered by secret couriers at night); a chicken stuffed with macaroni and fried gizzards; the neck skin of several chickens tied together and stuffed with caramelized onion, flour, and dill to make a sausage-like item called helzel. For excess, there was deconstructed, or 'lazy,' stuffed cabbage— everything that would have stewed inside a cabbage leaf shredded and shaped into patties instead— and a chicken rulet: a deboned chicken layered with sautéed garlic, caramelized carrot, and hard-boiled egg, then rolled up and fastened for cooking with needle and thread." (Savage Feast, p. 58).

There's an intriguing description of a soup I didn't really know about:


He was making ukha (oo-HA)— salmon soup; he had the salmon steak cubed and ready to go. Everyone thinks Russians eat borshch, but borshch is the Ukrainian mother soup. Russians eat it, too, but a Russian’s home soup is ukha. Root vegetables are all good, but without freshwater fish— pike, carp, sturgeon— Russia isn’t Russia. (Literally: Siberia survives on pike. There’s so much pike there, it’s dog food.) I had tried to explain to the lox lovers of the Upper West Side and the cedar-plank salmon eaters of the Northwest just what a thing ukha was, but they heard “boiled salmon” and tuned out. It was my mother soup. On a cold night, a bowl of ukha made things right for five minutes. We ate quickly." (pp. 181-182).

On a visit to a town in Ukraine with Oksana -- the author's grandfather's home aide who becomes a kind of outsider-family member -- he attends a funeral meal for Oksana's mother:


"I felt a prisoner’s hunger. Oksana had made rabbit in sour cream, ribs with pickled cabbage, a radish salad, pickled watermelon, and a waiting table of cakes and profiteroles 'Ukrainian style.' An empty chair had in front of it a vodka-filled shot glass covered with a piece of black bread— a commemorative spot for Oksana’s mother. The in-laws had arrived from their town with gifts from the village: canned river fish, canned zucchini, tomatoes marinated and brined. Also a five-gallon plastic drum of spring water that I belatedly discovered to contain not spring water but moonshine, and a huge jar of beet juice that had been fermenting for more than a week." (p. 244).

I particularly enjoyed this description of a Russian restaurant in New York:


"One Sunday night, a friend and I went through three rounds at a neighborhood bar and, gin in my head, I forgot to cross to the right side of Delancey Street when we walked past the restaurant. My friend was a Russian non-Russian like me, and we probably thought the same thing: Whatever affectation we’d find inside would at least share nothing with the studied scruffiness of a Lower East Side cocktail den circa 2015. Also, Russian food soaked up booze really well.

"It was beautiful inside. Blood-red walls, soft light, decorative chaos: a pressed-tin ceiling, blocks of mirrors, photographs hung up with clothespins. And the menu was both familiar and not: bliny, but also cucumber-and-pomegranate salad; borshch, but also pistachio-and-fenugreek shrimp. The restaurant felt like nothing but itself, an elusive commodity in the city that has everything." (pp. 287-288).

All in all, Savage Feast is a pretty good book, though not as interesting as some of the other books I have read about the Russian-Jewish immigrant experience in the US. It includes many recipes, though some are a bit repetitive, including a repeat of the exact words explaining why you roast a chicken at high heat and also of how you turn pancakes with your fingers. I have not tried any of the recipes, though they might be ok.

It sounds like another good one -- and probably not repetitive if you haven't read the first! I loved that restaurant description too.