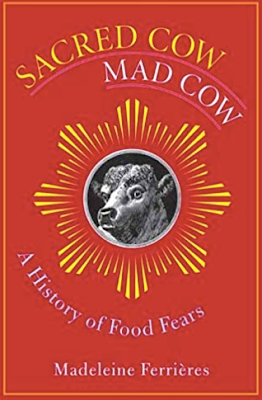 Madeleine Ferrières, a professor of social history at the University of Avignon, France, published Sacred Cow Mad Cow: A History of Food Fears in 2001; the English translation was published a few years later. Unfortunately, the early chapters of the book are very boring accounts of the way meat was raised, slaughtered, butchered, and inspected in the medieval and early modern eras. On my second try reading it, I managed to get into the much better chapters about the 18th and 19th centuries!

The book made one thing clear: food fears in the past were almost always fears of the unknown. Before the 19th century research by Pasteur and others, microorganisms caused the most mysterious and frightening effects of food preparation and consumption. Accidental poisoning was another source of disaster and fear, especially lead poisoning, copper-kettle poisoning, and poisoning from dangerous colorants used to improve the look of foods.

I was fascinated by the way people tried to deal with the evidence of these unseen agents in past times, and how terrifying these processes could be. Although the level of detail about food regulation in the medieval and early modern periods is somewhat excessive, the book offers a very fascinating portrait of how people tried to avoid food poisoning and food-borne disease.

A few examples of fear and awe towards effects of microorganisms before science explained them:
Little was known about nutrients until the 19th century, and what was known was often incorrect. Scurvy, a recognized risk, could be cured by eating produce, but fresh fruit was not always trusted because, it seems, you can make yourself sick by eating too much green fruit when it first comes into season and you have a vitamin deficiency due to no produce in late winter and early spring. Early analysis of nutritional value was also off track, as they concluded that vegetables and fruits were not worth eating because they were too low in energy/calories. The discovery of vitamins didn't occur until the early 20th century.

In the 19th century, scientists discovered quite a few important facts about nutrients, poisons, and microbiology. However, new inventions like canning and preserving methods or addition of nitrates to salted meats caused new problems. Botulism and other spoilage were a new experience when the invention of canning was applied without full understanding of sterile conditions -- thus new fears! Many new additives were tried, some with bad consequences, especially the addition of verdigris, a copper salt, to make canned foods like peas or pickles look "naturally" green. More fear!

Of course we have our own irrational reactions to new dangers, as well as scientific efforts to understand and curb them -- the book's title refers to the panic over Mad Cow Disease that took place shortly before its publication. We also have our own problems with the state of science in knowing what's good for us: eggs, for example. Harmful or beneficial? Clearly, however, people today have access to much better information for understanding the foods they eat, and regulation of dangerous substances, food processing, and agricultural practices is hopefully based on better science.

One reason I chose to read this book is that its author is French and much of the information in it is about France. (Though there's an interesting discussion of Chicago and the famous book The Jungle.) I've mentioned before that I try to find books that reflect a French point of view on food: so many Americans write about French food, which is fine but not complete.

This post will be shared as a final contribution to Tamara's blog event called Paris in July, which is wrapping up this week. I'm also sharing with Beth Fish's weekend cooking blog event. This review is the work of Mae at maefood dot blogspot dot com. If you are reading it elsewhere, it's been stolen.

Mae,
I am curious about the mention of copper kettle poisoning. I've never heard of it- and then the mention of the addition of verdigris, a copper salt, to make canned foods like peas or pickles look "naturally" green. More fear!

Copper pots made in recent times are lined with tin or another metal to avoid poisoning from the copper. If the lining is eroded, or if it's a solid copper pot, there is a danger of copper poisoning.

A new to me book. Though I think I'd like the medieval and early modern era chapters.

Even "The Simpsons" have an episode on this. I discussed this with friends in Australia as they could not understand why I cannot bring beef jerky into Germany (legally - I did so anyways, hmm, too yummy and the mad cow desease is over - Australia never had it anyways).
Why we should not eat pork too much... and yes, the accidental poisinings on the first travels, oh, my!
My respect, too, for making a second attempt to a "boring" book!

You read the most interesting books! Years ago when I was working at Ele's Place, one of the kids in my group said his mother had died from Mad Cow Disease. It was the first I'd heard of it in Michigan and to be honest, I'm not sure he was right, although why wouldn't he be. But it is a sobering thought.