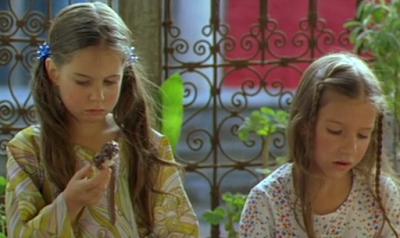 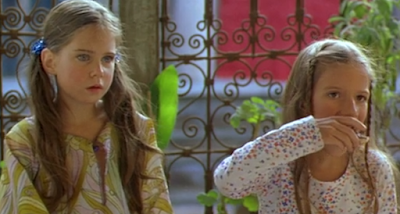 In the film "Hideous Kinky" (1998) Kate Winslet plays Julia, an English hippie with two small daughters. With them, she travels around Morocco in a random, hippie way picking up sympathetic men, worrying/not worrying about money, being interested in everything. It's totally of the past, a time when a young woman might actually go ahead with such razor-edged dangerous adventures, and never really feel threatened, or not much.

Towards the beginning Julia feeds "truffle paste -- it's a delicacy, actually" to the little girls, who wrinkle up their faces, say it tastes like mud, and ask when they'll again have rice pudding. But Julia is waiting for money from their father. ("Father Christmas, actually" one says.) It's interesting how food shows up throughout Morocco during their adventures. Here are a few more screen shots from the film that I find intriguing. 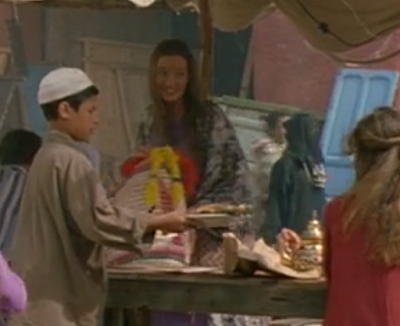 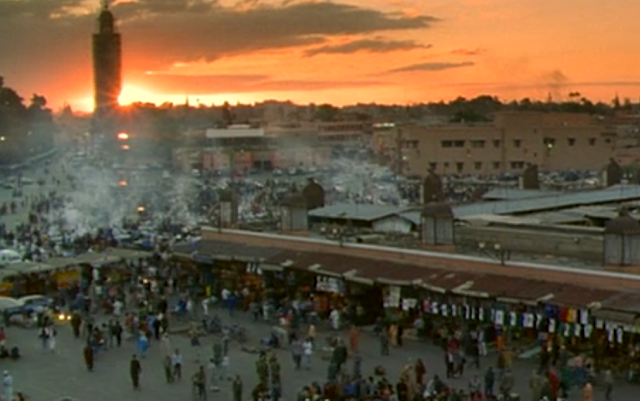 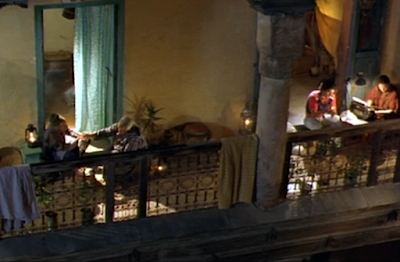 I'm a fan of  Esther Freud, author of the original novel Hideous Kinky, which was published in 1992. Because I am thinking about Moroccan food, I thought I'd look up how food appeared in a few movies set in Morocco that I once enjoyed. I don't recall if Humphrey Bogart and Ingrid Bergman ate anything in the course of "Casablanca." Or if any food appeared in "The Man Who Knew Too Much." Or "The Adventures of Tintin." To be researched!
Posted by Mae Travels at 6:00 AM

Let the fun begin! Mae is on a research mode and the movies, too! These will be fun.

And I don't know Hideous Kinky. Wonder how I missed that one!