Backstage at the Kabuki Theater 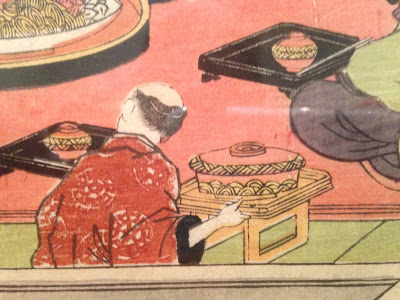 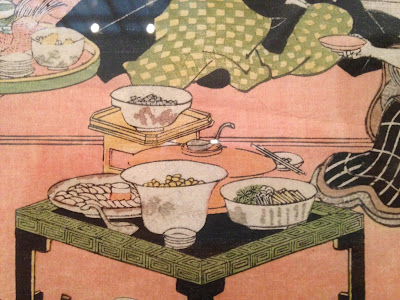 The large number of displayed prints include close-up portraits of actors, scenes with stage settings and dramatized moments from famous Kabuki plays, and imagined meetings between actors. Also in the exhibit is a short video with scenes from Kabuki drama as still presented in Tokyo, and a beautiful red kimono that was once worn onstage.

I learned a great deal about the popularity of this drama in the 18th and 19th century. Some of the prints were handed out as advertisements for the plays; others were sold to be collected by loyal fans of particular actors. Though now valuable museum-pieces the prints were originally very cheap or even given away for free. A few even contain ads for other products and businesses.

All parts in Kabuki plays were played by male actors who specialized in either male or female roles. Interestingly, the actors who played women's parts were often influential in setting fashion for actual women of the time.
Posted by Mae Travels at 7:49 PM

Hi Summer -- The Kabuki tradition doesn't seem so surprising when you consider that in Shakespeare's theater when he was writing, all actors were also men or boys. Think about it -- the roles of Juliet in "Romeo and Juliet" and of Ophelia in "Hamlet" and of Lady MacBeth were all written for male actors!
best... mae

This looks like a good exhibit. And yes, comment above -- that's what they all did back then, men playing the women. (Imagine the brawls between Kate and Petruccio in Taming of the Shrew or Desdemona and Othello!)

I love how you featured the cuisine-related images! Reminds me of all those good things under those little covered dishes when we were in Japan!

So many good food images!

Interesting there are so many food images. It must have been a very interesting exhibit.

Fascinating images. The food ones would have attracted my attention too. Thanks for sharing!

It must be international week at Weekend Cooking- we've had Russian, Japanese and London so far.

Love the colours. Have a great week. Cheers from Carole's Chatter