Julia Child's memoir My Life in France (written with Alex Prud'homme and published 2006) documents many things, including her lifelong friendship with Simone Beck, nicknamed Simca. Their relationship included working side by side as coauthors on Mastering the Art of French Cooking, working on subsequent cookbooks together, sharing family vacations, and more. 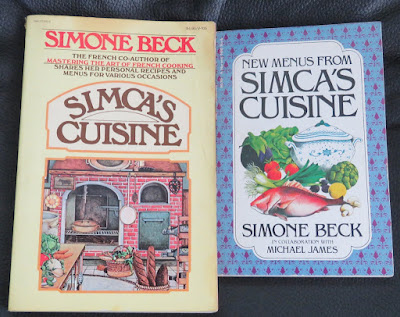 From their first meeting in 1951 in Paris, at a party for French and Americans involved with the Marshall plan, Julia and Simca were obviously compatible. They immediately talked about "food, food preparation, food people, wine, and restaurants," and agreed to meet again. Julia soon invited her to lunch:


"We talked about food, of course. She was a tall, dashing, vigorous française of about forty-two, with shoulder-length blond hair parted on the side, pale milky skin, high cheekbones, dark-rimmed glasses, and firmly held convictions. ... She studied at the Cordon Bleu under the famed chef and author Henri-Paul Pellaprat, whom she also hired for private cooking lessons. She had extensive knowledge of the cuisine of her native Normandy... renowned for its rich butter and cream, beef, and apples." (p. 114-115)

Simca, it turned out, was writing a cookbook with Louisette Bertholle. In My Life in France Julia documents how she became their coauthor and co-teacher at their cooking school in Paris. The narrative includes Simca and Julia's emerging quarrels and frustrations over Simca's cooking philosophy -- always affected by Simca's "firmly held convictions" which sometimes meant stubbornness. I found this all fascinating reading along with all Julia's memories of life in Paris in the 1950s.

By the time Julia Child wrote the memoir, Simca was no longer alive, so there's an amazing degree of frankness about their disagreements. Julia also described Simca's disappointment and probably jealousy of Julia's great popularity as a TV personality and food celebrity: successes that Simca did not share. While Julia did not attempt to claim undeserved credit, she indisputably became the only one of the three original authors to be prominent in the American national consciousness.

My Life in France also includes much about the continuing close friendship of Simca and Simca's husband with Julia and Paul Child. It describes a sterling example of trust, when Julia and Paul agreed to build a house on land in Normandy belonging to Simca's family, promising with a handshake to return the entire parcel when the time was right. Indeed, the land and house were returned without incident, after years of the two couples' vacationing together in the French countryside.

Long ago, I bought the two cookbooks that Simca published on her own -- works which never received the adulation and popularity that she had enjoyed as Julia Child's coauthor. I've tried various recipes from them over the years. I particularly like the recipe for Tartlettes à la dijonnaise, which I've always made as a single 8" tart. The result is a bit like the Parisian boulangerie item called pizza, which only slightly resembles American or Italian pizza. I don't know if the bakeries still have them, but these French pizzas were little tartlets filled with a delicious tomato filling and almost always topped with one anchovy and one black olive -- a delicious Paris memory from many visits!

One very interesting flavor trick for Simca's tartlets: you brush the inside of the pastry with mustard and sprinkle them with Swiss or Dutch cheese, 1/2 cup in all for the bottom and top of the tart. Pre-bake them at 375º. And after that, fill them with tomato filling, sprinkle them with more cheese, herbs, and olive oil; and bake them briefly again, also at 375º. Of course I'd be tempted to garnish them with just one olive and maybe one anchovy, for old time's sake.

If the tomatoes are fresh, skin seed, and juice them. Chop them roughly.

Heat the olive oil in a skillet, add the chopped onions, and cook them, stirring from time to time, until they are soft but not colored. Add the tomatoes, the minced garlic, half of the herbs, and salt and pepper.  If the tomatoes are fresh, simmer them for 5 to 10 minutes to cook them, but do not allow them to become a pulp; the pieces should retain their shape.

Fill the partially baked tart shells with the tomato mixture. Sprinkle with drops of olive oil and the remaining herbs, and spread with the grated cheese. Finish baking the tartlets in the oven for about 15 minutes -- just long enough to heat the pastry and the tomatoes and melt the cheese, which should form a glazed crust hiding the tomatoes.

Unmold and serve.
Posted by Mae Travels at 4:29 PM

Mae, I haven't read any of Julia's books - but I loved the movie. From what you've said, and what I've taken in before - Julia seems a character, almost larger than life. For a woman of her era, she was a change maker wasn't she?

Tamara -- yes, Julia Child was a really big influence in American cooking, as well as a fascinating person. The parts of the movie about her life were fun, but very limited. (The parts of the movie about the pathetic little imitator I won't discuss). Her cookbooks are really worth using, though I think few people bother any more. Her work really fits into the theme of Paris.

These tartlets sound delicious. Must pin this post. Thank you.

I've been meaning to track down a copy of Julia Child's book for ages, but Simca's tartlets sound delicious. Thank you for visiting my blog.

This has been so interesting. I am a Julia Child fan but didn't know anything of her friendship with Simca. Amazing how they agreed to build a house on Simca's land and it was all done on a handshake deal that was totally honoured - you don't hear of many people doing business like that any more. I do love the sound of the tart xx

Sounds interesting even for someone like me who just can't seem to get enthusiastic about cooking. I do appreciate other peoples good cooking though.

I don't know how I missed this except for that I missed most if not all of the last week of Paris in July. I knew some of the Simca background from reading the Prudhomme book but this adds to it. The tart recipe looks good and what a great hint about the mustard and cheese. I may have to try that one!