The Cockentrice and Other Dishes for Fabulous Feasts 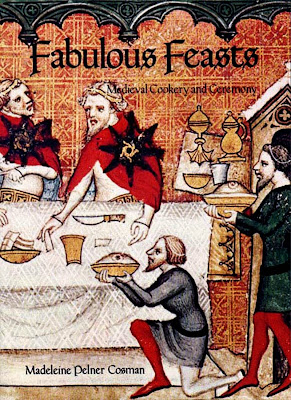 "Culinary spectacles were marvelous entertainment." writes Madeline Pelner Cosman in Fabulous Feasts: Medieval Cookery and Ceremony. "The best medieval feasts united the sumptuous with shocking, 'unnatural,' and incredible events. Foods themselves were sculptures or games. Cooked peacocks were served resplendent in their iridescent feathers. Tethered live birds were baked into pies; the crust cut, they sang. Bestiary animals such as the Cockentrice were created by ingenious cooks sewing the uppers of a baked chicken with the nethers of a pig." (p. 31)

Philosophical and literary commenters condemned such frivolous foods as gluttony, expressing "noble disdain against 'apparalleling' food. Apparelling meant decorating to create an appearance or an illusion... 'pride of the table.' ... By pandering to their patrons insatiable desires for 'newfangledness,' cooks aroused 'newer appetites' ... These are the very delicacies lauded by the medieval banquet manuals recommending food painting, food sculpture, and illusion foods. Here condemned are the pastry and aspic designs, ... meat dishes such as the Yrchoun [fake hedgehog] and Cockentrice, and the 'musician pies' which presented live instrumentalists in pastry." (p. 123)

Fabulous Feasts (published 1976) is a combination food history and cookbook, full of fascinating background like the information about the cockentrice, as well as reproductions of medieval and renaissance paintings and drawings of food, feasts, and farms. The text offers a lot of material on feasting customs and cuisine from that era in England, France, Italy, and Spain. It also describes what Geoffrey Chaucer might have eaten and how he and his wife might have shopped for food in London. A recipe section provides modernized recipes for your feasts.


A few interesting illustrations:
This post is for Cookbook Wednesday, sponsored by Months of Edible Celebrations. I have several other historic cookbooks on my list for future Cookbook Wednesdays. And I've done other posts on medieval and renaissance foods: "A Dirty Business," "Pizza for the Pope," "Italy: Ancient, Renaissance, and Modern Cookbooks," "What did Shakespeare eat?" "My imaginary kitchen in Medieval England," and "Mona Lisa by Request."
Posted by Mae Travels at 7:30 AM

This era in food for some reason has never interested me as far as the recipes are concerned. I'm not sure why.

I do however always enjoy the images associated with the time and the thought of Chaucer and his wife went grocery shopping for is very intriguing.

You have quite a collection of cookbooks, Mae...I always look forward to what you might be sharing for Cookbook Wednesday! Thanks Mae:)

I read your past posts – you gave such great info on so many subjects. I also have an old Larousse Gastronomique from decades ago – about the same age as my crock pot, bought in the 70s. I don’t think I have used it in 10 or more years, it is in the garage. Reading menus from medieval feasts - I cannot believe how much they ate.

Last Saturday was the library sale – they usually have a long table, very long, filled with cookbooks, at $1 each – so many cookbooks, old and new, on any type of cuisine. I usually buy a couple even though I don’t need anymore, and I did this time. I copied your brownie pudding and will make it soon.

This type of book is great as a reference as to what life was like, isn't it? It looks like it would be fun to read.