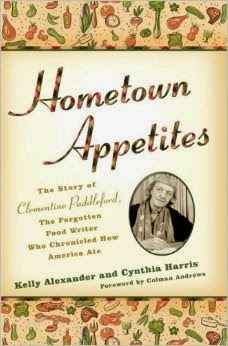 Hometown Appetites: The Story of Clementine Paddleford, the Forgotten Foodwriter who Chronicled How America Ate (2008) is a mildly interesting book, but most of what it has to say is embodied in the title. The authors, Kelly Alexander and Cynthia Harris, delved into a vast archive of material about the journalist Clementine Paddleford.

Paddleford was born in Kansas in 1898, attended journalism school in Kansas, began her career in Chicago, and became highly successful writing a column called "How America Eats" for the New York Herald Tribune and its weekly magazine. She published a collection of her food and recipe columns under the same title in 1960. The authors believe that she developed many of the attitudes and appreciations of American food that have become standards since she invented them. She died in 1967.

Despite her accomplishments, her wide popularity, and her innovations in collecting recipes from home cooks throughout America, she and her work were quickly forgotten. The authors find this mysterious, speculating that the rise of Craig Claiborne and his quite different type of restaurant-centered food writing at the New York Times eclipsed Paddleford's work. The fact that the Herald Tribune went out of business while the New York Times grew in importance also contributed to her obscurity.

As do most biographies, Hometown Appetites covers the life of its subject in great detail, maybe a bit more than I wanted to know. Paddleford's interesting style of dress is repeatedly mentioned: she wore flowing clothes and wasn't conventionally glamourous. Her way of relating to her subjects is suggested to be very well adapted to drawing them out, but not in much specific or vivid detail. One intriguing fact is that she piloted her own plane to get around the country, but there's almost no specific information about her learning to fly or other detail that might have been fun to learn.

The authors describe Paddleford's writing style as breathless and overblown, but somehow their own prose frequently seems to suffer from the same problem. Here's a sentence the authors wrote about Paddleford's college experience to ponder: "The new editor wasn't just blowing smoke, though -- she had really earned her chops." (p. 33)

Here's another example: "She was bursting with intimate memories of the pleasure of eating: the thrill of a cool glass of tart lemonade on a blisteringly hot day, and coming home from school to the warm yeasty smell of rolls. Like water flowing up in a well, Paddleford's memories of her family's meals bubbled up into her reporting. " (p. 67) 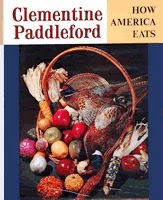 Paddleford also wrote columns about where to buy interesting foods and ingredients, especially in New York. She often relied on public relations staff from food producers, which is interesting, though the authors of the book don't explore how this may have affected her writing -- another intriguing subject they didn't quite address.

"How America Eats" sounds like a really interesting food column, as Paddleford was evidently a very skilled interviewer and wrote about interesting choices, including farmers and farm women, immigrants, city dwellers, food producers, and many other people all over America. I would like to take a look at the 1960 book eventually -- there are copies for sale online at not too terrible prices. It was updated in 2011 (after the biography was published), and the updated version is available in the local library, but I would prefer to see the original.

I'm looking forward to a discussion of this book at my culinary book club next week.
Posted by Mae Travels at 7:30 AM