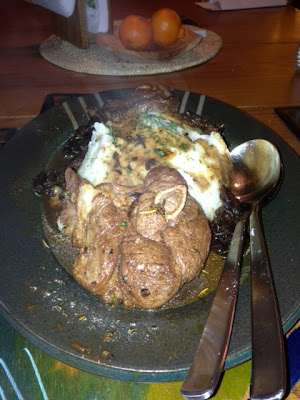 If you were surprised a couple days ago to learn that I carefully followed three entire recipes from my new cookbook, so was I. (For details, see my last post, Jerusalem: A Cookbook, in which I described how I made authors Ottolenghi and Tamimi's recipe for spiced carrots, Pilpelchuma pepper and garlic spice blend for the carrots, and chicken with fennel and tangerines.) I continued reading this cookbook, and today during a visit to Barnes and Noble I even looked through Ottolenghi's other cookbook, Plenty, a vegetarian cookbook -- lots of recipes for eggplant, salads, and grains. He's quite an inspiring recipe author.

Tonight for dinner, I intended to make even more recipes from Jerusalem. I thought I was ready. I ended up just taking some inspiration and following my own ideas, however. I expected that this would happen eventually but didn't realize it would be so quick. I have reasons.

First of all, I had bought some lamb chops, which I thought would be a good choice for middle eastern food. As it happens, all of the lamb recipes in Jerusalem are for lamb meatballs or similar dishes using ground or minced lamb, not whole chops. So I had to improvise, and use some of the Pilpelchuma as a rub, adding a bit of lemon juice and rosemary. I braised them with a bit of really good red wine that Lenny got out of the wine cellar.

Second, I planned to make roast potatoes with prunes -- a delicious-sounding recipe which Ottolenghi says is inspired by the Ashkenazi dish tzimmes. Oops, I waited too long and there wasn't enough time to boil then roast potatoes and to make caramel as the recipe calls for. If I'm in a hurry caramel is too scary since it can burn up if you so much as look the other way at the wrong moment or have some bad result if you mess up when adding the ice water to it. Please, Mr. O, could I be a coward and just use honey? Oh, never mind, I want to try the real recipes.

Tonight, though, I just made mashed potatoes, using the microwave to cook them in their jackets and then mashing them while the lamb simmered. Instead of using prunes with the potatoes, I put them in the pan with the braised lamb chops. The result was actually quite delicious. Pipelchuma is quite a nice spice rub, and the prunes were a nice taste contrast with the meat and potatoes. The photo shows how I put the potatoes on a platter surrounded by chops, prunes, and sauce. Inspired, I felt.

I definitely plan to select, shop for ingredients, and try other recipes in detail. I mean it. Honest.