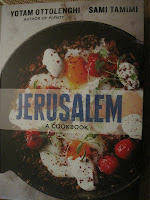 Yotam Ottolenghi, an Israeli Jew, and Sami Tamimi, an Israeli Arab, work together at Ottolenghi’s restaurant in London. Their recently-published cookbook presents the foods of their native city: Jerusalem. They describe the era of their childhood as a much more peacful and harmonious time than the present, and hope for peace which they think might come through a shared love of hummus. I wish they would prove to be right.

The book is beautiful. Abundant photos illustrate a variety of Jerusalem city scenes, restaurant interiors just as I remember them from past trips, and totally appetizing recipe presentations. Narratives about the foods and the relationships (often troubled) between the many communities mingle with the recipes.

One recipe particularly appealed to me because its ingredients are so perfect for a winter dinner in the frozen north -- though thanks to a perturbed upper atmosphere, Jerusalem has received far more snow this year than my home Ann Arbor, Michigan. I made the recipe this afternoon, and we ate it for dinner -- fresh fennel, clementines, and chicken marinated and roasted with a delicious sauce. Anise-flavored liqueur and fennel seeds, along with the chicken and produce, emphasize the flavor of the fresh fennel bulbs. The recipe calls for Arak, an anise liqueur made in Beiruit, Lebanon; or Ouzo, the Greek version; or Pernod an anise-flavored French apéritif. I chose Pernod. 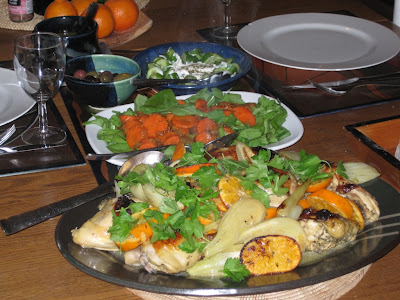 Here’s the chicken recipe as I made it.

Chopped flat-leaf parsley as a garnish 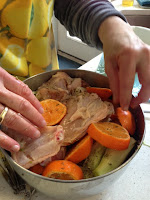 In large bowl place marinade and all other ingredients except parsley garnish. Combine well with your hands. Optional: marinate for several hours or overnight. I did so for around 4 hours.

Preheat oven to 475 degrees F. Place chicken skin-side up and all other ingredients in a single layer in a large roasting pan (around 12 by 14.5 inches).  Place in preheated oven and roast for 35 minutes. At this point, my chicken was cooked through but pale -- to obtain the color shown in the book’s photo, I put it under the broiler for another 5 minutes to get really brown.

Remove chicken, fruit, and vegetables from pan to a serving dish, and boil down the sauce a bit. I put the sauce in a separate serving bowl from the chicken, though the recipe says just pour it over the chicken. Garnish with parsley. 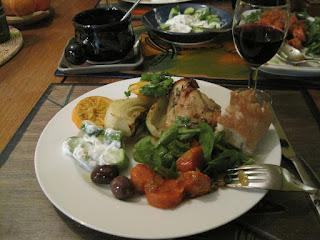 I tried a couple of other recipes from the cookbook for tonight’s dinner as well. I made a spicy carrot dish, which I believe I once ate in a restaurant in Tel Aviv where our cousin Janet took us. It contains carrots (serendipity: I was making stock from the chicken trimmings so I cooked the carrots in the stock), fried onion, sugar, cider vinegar, and a spice blend called Pilpelchuma (recipe in the condiment section). The carrots are served with arugula. 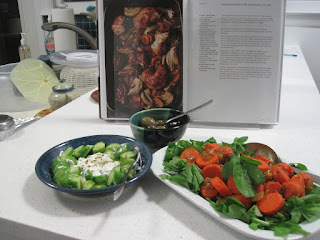 I also served some cucumbers with Greek yogurt sprinkled with some newly-bought zaatar spice blend, and I put out some mixed Mediterranean olives since I have never been to an Israeli restaurant that didn’t serve some olives.

I just love this cookbook!
Posted by Mae Travels at 8:16 PM