What did Shakespeare eat? 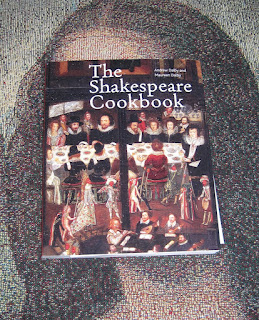 What did Shakespeare eat?

Definitive answers here: The Shakespeare Cookbook by Andrew Dalby and Maureen Dalby, published by the British Museum Press this year. Andrew Dalby is a culinary historian, so this is a work of scholarship, using contemporary cookbooks and dietary advice books that were in print during Shakespeare's lifetime. I had no idea how many such works existed!

Another surprise: many recipes are simple and close to modern cooking. For example, chicken fricassee described on page 54 is almost exactly the way I sometimes use up leftover chicken, though the modern version often includes pimentos (a variety of capsicum peppers, which Dalby says hadn't reached England from the New World yet) and the Shakespeare-era version uses the spice mace, which isn't on my spice shelf.

A variety of pies of all sizes combine meat, fruit, suet, and spice into a preparation that predates our mince pies. The small ones are called "chewets" and contain saffron and ground ginger along with cooked meat. If I could find suet, I would be interested to try pies or chewets, as I have always liked that funny packaged mincemeat that is featured at Christmas and Thanksgiving, and I would like to meet its ancestor. (If I could find a swan, there's another recipe in the book I might try too.)

Similarly there are recipes for a sort of meatball including meat-egg-dried fruit and flavored with mace. Large ones were called Farts, small ones were called Fysts. I definitely plan to try these, as the modernized recipe doesn't require suet at all. And the name is so amusing! Dalby doesn't offer any word history on this. Although there are many references on the Web to the original recipe, a quick look didn't offer me any insight into why this word meant little meatballs in Elizabethan times.

The explanation of what the word "cake" meant to Shakespeare is very interesting. "A cake, to Shakespeare, was a concept that overlapped with the modern English cake but didn't coincide with it." (page 70)

So, the authors point out, cakes could sweet or savory in the famous line


"Dost thou think, because thou art virtuous, that there shall be no more cakes and ale?"

The word cake could refer to a loaf cake, a tea-cake, or a waffle. It could mean a biscuit. (I think this is the British biscuit, which in America we call a cookie -- the problem of terminology didn't stop in Shakespeare's time.) The book's cake recipe is for Barm Brak, made from white-bread dough, sugar, lard, eggs, raisins, and sweet spices.

Every section of the book has a discussion of a food reference in a particular Shakespeare play, with elaborations from the literature of Shakespeare's contemporaries as well as contemporary food sources. Almost every page includes an illustration, also contemporary to Shakespeare. And every section offers a wide range of interesting references and information, as well as at least one recipe quoted directly from the sources and then a modernized version. A fantastic book, for which I'm grateful to my friend Sheila!
Posted by Mae Travels at 11:35 AM

This sounds like a fascinating book! Glad you (and Sheila) discovered it!