The Witch of Endor Ate Here 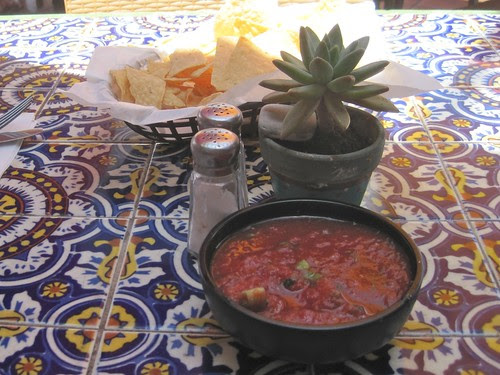 I've heard that the Witch of Endor has moved to Ojai, California, and lives or at least hangs out in an antique shop there. Or so says Michael Scott the author of The Alchemyst: The Secrets of the Immortal Nicholas Flamel. Earlier today, we were in Ojai for lunch in the sun at a nice little Mexican restaurant. We had standard, tasty Cal-Mex food starting with the usual chips and salsa, and continuing with platters of tamales and pupusas with a side of beans and rice. Nothing out of the ordinary, but we enjoyed ourselves.

We also walked down Main Street near Libby Park, location of the witch's shop. We poked around in the shopping arcades across the street, looked in some galleries, and a went to a large bookstore, but didn't see any witches. However, I suspect that a modern witch would rather eat Mexican food than hummus, olives, eggplant salad, and pita, which is what she'd get nowadays in a sunny outdoor restaurant in Endor in the Jezreel Valley where she came from. In Biblical days she might have had bread, dates, and some kind of soft white cheese, I guess. I don't know what Biblical witches ate.

We didn't hear about Sott's witch until we got home, anyway, or we would have checked a few more antique shops. We found out that Evelyn and Tom were watching us on "Find my friends." When they saw that we were in Ojai they were quite surprised as they weren't sure whether Scott had invented Ojai itself, as well as the witch's antique shop.
Posted by Mae Travels at 8:41 PM

As for the witches, as you know, I have been accused of being a good one:) I actually have a few books that explore the dining habits of witches both good and "bad."

Thanks for sharing this post and, thanks for joining the Picnic Game. A- For Artichokes or any other A dish you may have on hand, is yours!!! "See" you there!