I have been reading two complementary books:

The Ambassadors by Henry James 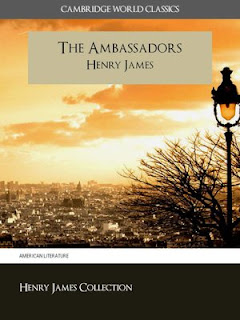 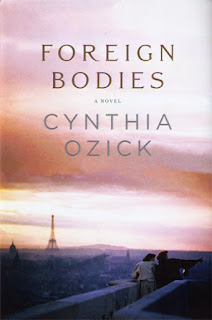 I'm kind of a fan of Ozick, and when I learned that this recent work of hers was in some way based on The Ambassadors, I decided to read both. Indeed, thematically they have much in common, and there's a lot I could say about them, but for the moment, I'm just going to talk about the way that the two authors use food in their narratives. I think it helps to pinpoint why I like Ozick but I'm infuriated by James.

Unsympathetic, self-absorbed, idly rich, status-conscious, easily impressed (by European pretensions), egocentric characters abound in The Ambassadors. I'm really not sure if James saw them that way, or if he just admired people who were self-absorbed, idly rich, egocentric, and gullible about European pretensions. I'm sure he didn't view them as shallow, but that's how they seem to me when all is said and done. Mostly James's characters talk and talk and talk, though occasionally they go out into the countryside or stop for a meal, continuing to be self-absorbed etc. all the time.

At one meal, a character named Madame de Vionnet -- whose own background is unclear, but who is married into a vaguely identified titled family -- sits opposite Strether, the novel's central character (who is the most extremely self-absorbed, idle, status-conscious, and easily impressed of them all). She looks at him "over their intensely white table-linen, their omelette aux tomates, their bottle of straw-colored Chablis."

A few paragraphs later we hear


"If all the accidents were to fight on her side ... he could only give himself up. This was what he had done in privately deciding then and there to propose she should breakfast with him. What did the success of his proposal in fact resemble but the smash in which a regular runaway properly ends? The smash was their walk, their dejeuner, their omelette, the Chablis, the place, the view, their present talk and his present pleasure in it -- to say nothing, wonder of wonders, of her own." (Kindle location 4188, Cambridge Edition)

As the novel winds up, Strether goes to see a young man named Chad, another self-absorbed and easily manipulated character. Upon entering Chad's rooms, he finds a table where Chad has recently eaten. It contained


"a supper of light cold clever French things, which one could see the remains of there in the circle of the lamp, pretty and ultra-Parisian, he had come into the air again for a smoke, was occupied at the moment of Strether's approach in what might have been called taking up his life afresh. His life, his life!..." (Kindle location 8061)

The last sections of The Ambassadors consist of Strether's endless final interactions with various women who have influence over either Chad or Strether himself. At a critical one, Strether meets with Maria Gostrey, a character who seems to provide him with some sort of link to reality (perhaps):


"He came back to his breakfast; he partook presently of the charming melon, which she liberally cut for him; and it was only after this that he met her question.... She waited, she watched, she served him and amused him ... "  (Kindle location 8258)

This little detail leads up to a critical interchange between them, where he tells her he will leave her instead of making a commitment to her that she had been angling for.

Excuse me if these quotes seem long-winded. Henry James IS long-winded. As I see it, highly refined bits of food sustain the characters in long bouts of navel-gazing and constantly worrying about commitment that in fact are sort of maddening. Strether is 55 years old, for crying out loud!

The level of detail that's allusive but very unspecific is characteristic of the novel as a whole. It's why I can't believe I ever read anything by Henry James.

AND IN CONTRAST...
Cynthia Ozick's characters are more human and sympathetic than those of James (not one of whom I like at all!) The thematic similarity of the novels is not in my view based on a similarity of characters' temperament or personality or values, but on the way that one character becomes an "ambassador" between others. In a way, Ozick's commentary makes James's exploration of the topic of ambassadorship have a wider meaning, borrowing the most interesting of his ideas.

Ozick does not go for the extreme subtlety that James gives this thought -- especially as he makes all the events and conversations take place in Paris, and never directly describes or quotes the woman behind all the machinations. Her depiction of all the characters (the sender of "messages," the "ambassador," and the recipients of the "messages") in my opinion gives her book more depth, but I'm sure lots of critics and James-lovers would disagree.

Food also isn't seen the same etherial way. It's pretty down-to-earth. One big reason is that many of the characters in Ozick's novel live in middle class America or in not-even-genteel poverty as exiles or displaced persons in Europe. (The events take place in 1952: one character is literally a D.P. whose former life and family were destroyed by time in concentration camps.) So right at the beginning, when the central character, Bea Nightingale, searches Paris for her renegade nephew, she finds a cafe with "odors of eggs and coffee all around." (p. 6)

Many more flashback memories occur in Ozick's novel than in James's. This is another way I think the novel is more rooted in real life, not just some sort of rich person's imaginary world.

Bea remembers a wedding of her best friend where she had been with her future (now ex) husband:


"They were standing side by side near an ice sculpture -- twin mermaids embracing -- at the base of which lay wide oval platters of sliced melon, layer upon layer of pink, orange, green, studded with swollen strawberries still attached to their leafy stems. The strawberries resembled surgically removed organs freshly lifted from the gash in an anaesthetized belly." (p. 27)

Maybe Ozick's characters are portrayed as a bit vulgar, in contrast to the excessively refined James characters. But she knows what they are. She doesn't admire them for everything, though she communicates a level of sympathy that I as a reader can share.

Ozick says the young man who is to be "rescued" by the ambassador from home is "a luftmentch" which she defines as "an inconsequential person, an impracticality made of air." (p. 96) This would be a good epithet for the young man in the James book, too -- in fact for several of them.
Posted by Mae Travels at 6:05 PM