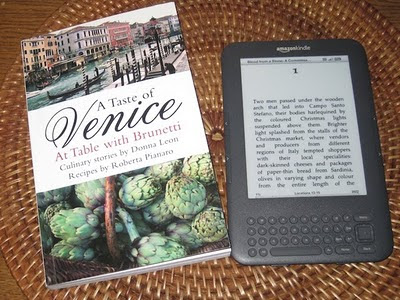 Delightful meals eaten during a crime investigation are among my favorite features of detective novels. For Christmas, I received a cookbook based on the novels of Donna Leon and her detective Guido Brunetti of the Venice police. I could make the delicious meals that Brunetti's wife cooks, such as veal liver with polenta (p. 210) -- which sounded so good in Death in a Strange Country. Or see if I could do better than Paola and Guido's daughter Chiara, who struggled to make mushroom-filled ravioli (p. 85) in A Noble Radiance.

I wasn't familiar with this series, so I purchased and read several of Leon's novels on my Kindle. Learning about the detective's favorite food before I read about the detective is really a total reversal! I'm so grateful to my friend Sheila who thought of this gift. Now I have both a Venetian cookbook and a new detective series to love.

Brunetti's wife Paola makes food to rival the French home cooking of Madame Maigret, Simenon's detective. I think her cooking sounds better than the food made by Nero Wolfe and his chef. Brunetti's lunches and snacks in typical little Venetian lunch-counters and bars are different -- but make me recall the local color in Whataburger, where Jim Chee and Joe Leaphorn eat in the novels of Tony Hillerman. Leon's novels are a bit mannered but nowhere near the exaggerated style of Robert Parker, whose detectives' food habits come close to parody.

Food in detective fiction -- a glorious tradition!
Posted by Mae Travels at 8:51 AM

Oh, good -- I'm always looking for a good mystery recommendatio -- and if food and travel are involved, I'm all the more excited!

(My verificatio word is "culari" -- which is probably about as close to culinary a verification word will ever be!)