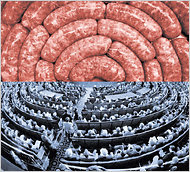 “If you like laws and sausages, you should never watch either one being made.”

In other words, the legislative process, though messy and sometimes unappetizing, can produce healthy, wholesome results.

He interviews sausage makers about how their process differs from that of Congress:

“I’m so insulted when people say that lawmaking is like sausage making,” said Stanley A. Feder, president of Simply Sausage, whose plant here turns out 60,000 pounds of links a year.

“With legislation, you can have hundreds of cooks — members of Congress, lobbyists, federal agency officials, state officials,” Mr. Feder said. “In sausage making, you generally have one person, the wurstmeister, who runs the business and makes the decisions.”...

At Simply Sausage, the bones and other inedible, indigestible, unsavory parts are dumped in a big garbage pail and discarded. On Capitol Hill, stale old ideas are recycled year after year.

I'm inspired by new confidence in sausages. But as the article says, I'm afraid that "The legislative meat grinder turns out many strange products."
Posted by Mae Travels at 8:33 AM