I read that the Getty Museum in L.A. has a show "Tasteful Pictures" about food photography. From the Getty website: "Spanning the period from the mid-19th century until today, the images highlight important technological and aesthetic innovations as well as matters of taste. "

I was fascinated by a picture of a man delivering bagels by the photographer Weegee. Below is a picture by one of my many favorite artists, Man Ray. 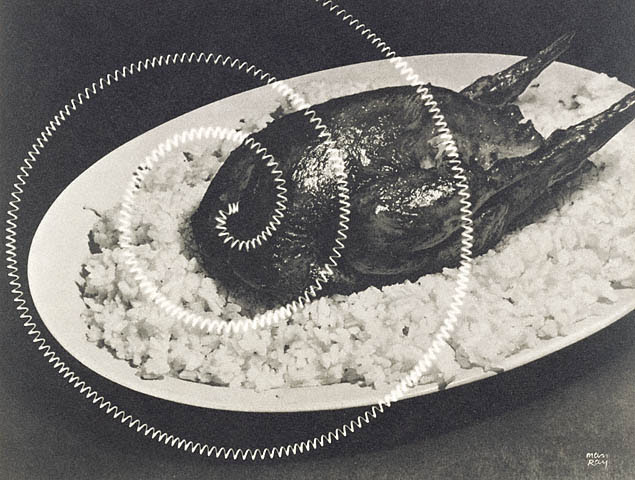 "In 1931 the Paris electric company CPDE commissioned Man Ray to produce a series of images promoting the personal uses of electricity. The resulting portfolio, Électricité , included pictures of the uses of electricity in each room of a house, as in Cuisine (Kitchen). The whimsical print lent a familiarity and friendliness to the mysterious power marketed by CPDE.

"The Électricité portfolio included ten Rayographs reproduced as photogravures. The company released it in an edition of five hundred for distribution to top CPDE executives and special customers. "

I'd love to see this show. The pictures of "Électricité" remind me of a huge mural "La Fée Électricité" by Raoul Dufy. The French Electricity Company commissioned this work in 1937. It's fascinating that they were so aware and supportive of modern art.
Posted by Mae Travels at 1:53 PM