Polish Peach and Apricot Cake from a New Cookbook 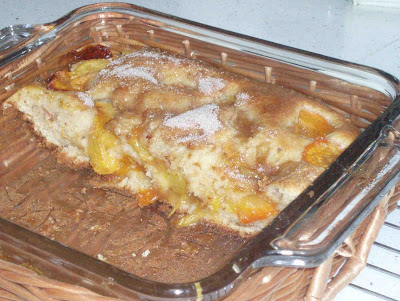 Stunningly beautiful Michigan peaches, apricots, plums, peppers, tomatoes, are in season. Lat night for dinner we enjoyed tomato salad, grilled peppers, and the depicted cake made from peaches and apricots.

The cake recipe is very much like the one my mother made, in the Jewish tradition, but this one comes from The Polish Country Kitchen Cookbook by Sophie Hodorowicz Knab. Some Polish friends recently gave me this book as a gift, and I'm really enjoying it.

Like many recently published cookbooks, this one includes a great deal of social history and food history for the recipes. It is organized around the seasons and holidays celebrated in Polish villages. The author is Polish-American, and combines her family recipes and traditions with information about customs throughout Poland in the last two centuries.

While I've read quite a bit about Jewish traditions in villages in the same regions, I learned a lot by reading this book. For one thing, Polish village life continued until quite recently -- and probably is still alive in places. In contrast, I'm used to thinking of Jewish village life, which was completely extinguished in World War II. 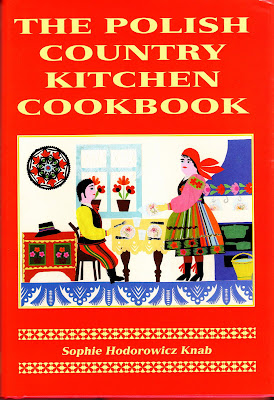 The parallels and similarities between Polish customs, foodways, and even vocabulary, and those of their Jewish neighbors are rarely mentioned in the book, but I found it striking. Recipes include similar cakes (babas and babkas), fruit compotes, poppy seed sweets, meat and vegetable soups, noodle casseroles (which would be called kugel in Jewish tradition), kasha and kishka (same words for buckwheat and stuffed intestines, but the Poles used pork), potato pancakes, stuffed dumplings, cucumber salad and others. In many cases, the only difference is the use of bacon and pork fat in the Polish recipe instead of chicken schmaltz, or the use of sour cream to garnish meat dishes as well as vegetable dishes.

The biggest surprise to me was the line-up of Easter foods placed in a basket to be ritually blessed by the priest. A Paschal Lamb made from cake or butter, eggs, meat ("especially pork ... reminiscent of the Old Law of the Old Testament which forbade pork"), horseradish, salt, greenery, and bread were the ritual foods (p. 164-165). Meanwhile, for Passover the same week, their Jewish neighbors, not mentioned in the book, prepared a ritual plate with a lamb bone, horseradish, eggs, salt, greenery, and unleavened bread, as well as charoset -- but never, never pork. I had no idea that the cultures mirrored one another this way. 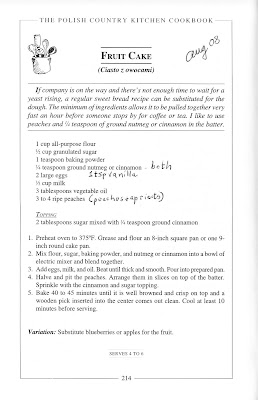 Click on this copy of the cake recipe -- which includes my notes -- to see a full-sized version. It's definitely a good recipe! For my cake yesterday, I used my sister's technique of baking the cake for 10 minutes before topping it with the fruit, so that all the fruit doesn't sink to the bottom of the cake.
Posted by Mae Travels at 12:03 PM

I know what dessert I'm making for dinner tonight. ;-) Thanks!

BTW... Darra Goldstein, who wrote the Russian Cookbook I love so much, has also done a lot of food history in terms of Pesach traditions, etc. Growing up I had that cucumber salad from all the Jewish delis in my neighborhood and when I first learned to make it, yes, I sweated the cukes. I love that one recipe, though. What I've found over the years is that so much of the stuff I was sure was Jewish cooking (of the Ashkenazic traditions) was, in fact, Eastern European. Or vice versa.