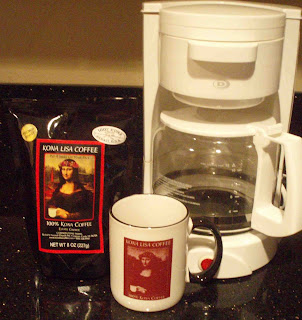 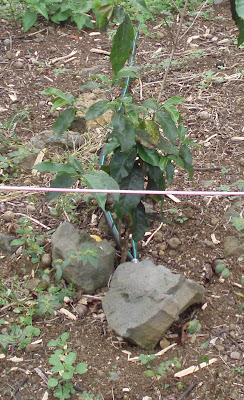 Saturday at the Keahou Farmers Market here in Kona, we met Ron and Mary Lake, owners of the Kona Lisa Coffee farm. We've been ordering Kona Lisa coffee on the internet since last year, when we met their predecessors at the market; soon afterwards, Ron and Mary bought the farm and took over the coffee production and sales business. Today we visited them and learned about the way our coffee is grown.

We drove up the hill from our condo and in the direction of the area called Captain Cook -- because it's where Captain Cook was first welcomed by the Hawaiian natives, and then unfortunately met his fate.

Cornerstone Farms, the producer of Kona Lisa coffee, is around 9 acres, of which six and a half are planted with coffee. There are a few macadamia nut trees, lilikoi vines, bananas (also sold at the Farmers Market), papayas, and a big mango tree, as well as a house and large tent-like facility for processing and drying the coffee.

Coffee grows on pretty big bushes. Ron and Mary are planting some new coffee plants, as shown in the first photo. Most of the plants on the farm are mature, and have coffee berries at various stages of ripeness. When ripe, the berries turn from green to bright red. One of the reasons that Kona coffee is the smoothest-tasting of all coffees, is that farmers here carefully hand pick only the red berries, Ron explained to us. 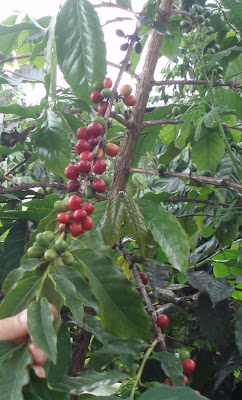 One expert picker hired for the big harvests could pick 300 pounds of ripe berries a day on a farm in Kona, Ron told us. When picking coffee in Columbia, where red and green berries are stripped off the tree in bulk (sometimes by machine) this picker could get 800 pounds a day. Ron says he can pick up to 125 pounds in a day.

Once picked, ripe berries are put through a hopper to strip the flesh off, leaving the pale whitish-yellow bean which comes in a husk (third photo). The beans are fermented in a cement vat, then dried to a measured 11% moisture -- more will lead to mold, less to loss of flavor. The drying floor is underneath a large translucent tent with a cement floor.

At this point,the fermented and dried coffee berries can keep for quite a while, as long as the moisture is maintained. Special double plastic bags seal in the moisture.

The next steps are milling to remove the hull and roasting. These steps are outsourced to two facilities in the neighborhood. As we drove around the west-facing hillside near Captain Cook Hawaii, we saw many other coffee farms and processing facilities -- this is the heart of Kona coffee country, and has been for something like a century. 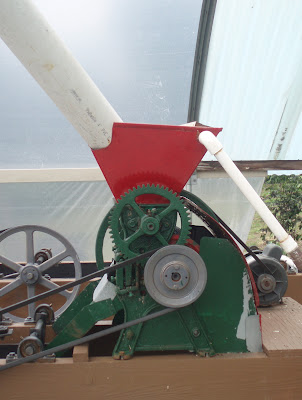 Roasting is evidently a kind of an art. Juanita is the name of Kona Lisa coffee's expert roaster. She uses a drum roaster; medium roast is achieved at 427º and French roast (dark) is at 455º -- with an air roaster, temperatures differ, and the smoky flavor of French roast isn't attainable. As the coffee roasts, it expands and cracks -- sort of like popcorn. Medium roast is also called "first crack," and dark roast, "second crack," Mary told me. Dark roast takes up more space per pound as a result. Sometimes the 8 oz bags can barely be sealed when filled with French roast coffee.

The many processing steps each reduce the weight of the coffee. For 100 pounds of ripe red coffee berries in the hopper, the farm produces 14 pounds of roasted coffee to sell to coffee lovers like me. 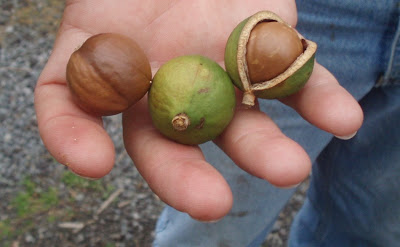 At the moment, only a small amount of coffee is ripe for picking, so there isn't much activity around the hopper and drying floor -- a few macadamia nuts are drying instead. The mac nut is very hard to crack, so Ron and Mary only process a few for their friends and relatives, not for sale along with the other produce of the farm.

They also showed us a lilikoi plant with beautiful blossoms as well as both green and ripe fruit. This morning, they had made lilikoi juice -- next time they pick them, Mary said she would make syrup. She crushed a ripe fruit, which had a fabulous lilikoi odor, fresher and more pungent than any flavoring I've had. 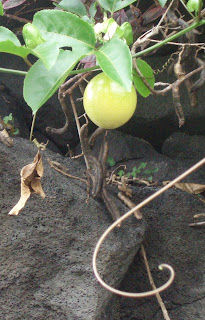 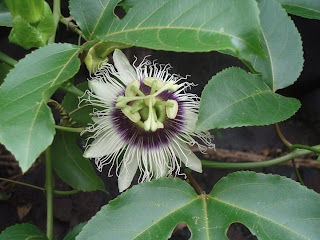 We also asked if the pervasive volcanic fog (or vog) that hangs everywhere on this side of the island was affecting coffee plantations, as we had heard it was affecting other agriculture. Evidently Captain Cook and the hillsides facing down this side of the island aren't as severely affected as the flower farms and other farms closer to the volcano.

If you want to try fantastic, smooth-tasting coffee, here's the place: Kona Lisa coffe.
Posted by Mae Travels at 12:10 AM

Okay, so I have to ask... do you order the coffee for the coffee or for the Mona Lisa connection? ;-)

When I first saw Kona Lisa coffee at the Kona Farmers Market last year, I bought it for the logo -- but I keep ordering it because I am an afficionado of coffee and it's fabulous. In fact, I keep all the Kona Lisa wrappers and there are far too many of them.