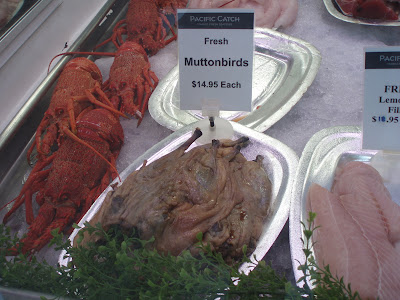 The muttonbird is a wild seabird that lives in this part of the world. I knew that these birds were prey for early people in this land, where the sea was a major source of food. I was really astonished to see that they are still sold as seafood.

Quote from the online Encyclopedia of New Zealand: "Also known as the sooty shearwater or titi, the New Zealand muttonbird is Puffinus griseus and belongs to the order of sea birds known as petrels. As a name, “muttonbird” appears to have originated among early European settlers in Australasia and is said to refer to the taste of the flesh. At least as probable is the theory that the name refers to the rather woolly appearance of the downy young."

My discovery that people eat these sea birds was especially startling, as our restaurant meals here have been quite wonderful -- but not in the least exotic as to ingredients.
Posted by Mae Travels at 10:09 PM