What if global warming makes our crops fail? 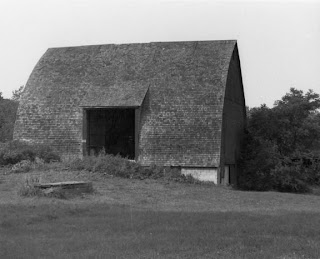 Global warming may have uneven effects, but sooner or later, it will cause scarcity. More immediately, America has intensified efforts to use grain for our possibly insane demand to fuel our vehicles. In response, the price of food is already rising in poor countries like Mexico. The result of global warming may be slow, but the major crops of the world are at risk.

Americans today have no experience of famine. Rather, we live with incessant glut. We middle class Americans don't even use grain as our main source of food: for us, bread is not the "staff of life." Reference to bread as food has become a metaphor. Consequently when we read about food disasters in the past, we can't imagine how it could happen here.

In reading about the past, I've collected a few quotations on how peasants and farmers coped when their crops failed and their governments had taken no measures to help. Maybe agrarian coping mechanisms won't be relevant in the coming era. And who knows how major food shortages will affect the majority of world populations who live in cities -- will they eat rats? Thats one thing city people have done during sieges in historic wars.

European peasants even until the mid-20th century had long-standing practical methods for making some facsimile of bread during grain-harvest failures and other disasters: "When the dark days of famine came, the [Italian] peasants tried to make bread with an infinite variety of materials. In practice almost anything could be used to prepare a rude surrogate: darnel or tares, licorice, erba del vetro (a rough grass commonly sown in fallow fields, used as animal feed), roots, thistles, various leaves, scorzonera, hawthorn, etc." Other famine breads could be made from acorns, chestnut flour, grass, bran, and other less desirable foodstuffs such as pear-tree or apple-tree sawdust or animal fodder. Children in those days would sing: "The master gets the grain, the peasant gets the straw."

When their crops failed, English farmers may "have eaten the bark from trees and grass from the fields. . . . the French peasantry, in their extremity, ate unripe grain, roots, grass, and the intestines and blood of animals that had been slaughtered as food for the better-off."

In 1585-6, French peasants were "forced to eat acorns, wild roots, bracken, marc and grape seeds dried in the oven and ground into flour -- not to mention pine bark and the bark of other trees, walnut and almond shells, broken tiles and bricks mixed with a few handfuls of barley, oats or bran flour." They also ate "bread made from a mixture of couch grass and sheep's entrails." Even in good times, peasants would practice eating bark and other inedibles to ensure that they could still survive in case of famine. 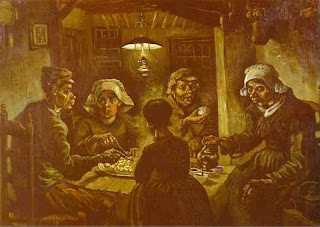 In the potato-crop failure of the mid-19th century, the Irish starved or saved themselves by coming to America. British colonial-era planning reduced the impact of famine in the Indian subcontinent -- at least sometimes. In Africa, scarcity has never been conquered. Lack of resources may be one of the causes of some of the 21st century horrors taking place there already.

Every specific famine I've read about had both political and environmental causes that led some people to starve. While the potatoes rotted, Ireland was exporting food to England -- but the poor had no right to it, and the politicians in Parliament preached about the Free Market. (Really.) This won't be different if global warming and governmental indifference begin to decrease the world's food supplies.

Basically, we've lost the knack. I don't think history can prepare us for what might happen.

References: Camporesi, The Magic Harvest, pp. 23-4 and 95; Appleby, Famine in Tudor and Stuart England, p. 8; Mennell, All Manner of Food, p. 26; MacClancy, Consuming Culture, p. 44; the source for the "practice famine" is Eugen Weber. The first picture was taken by Evelyn. The second is Van Gogh's "Potato Eaters" -- hungry people. This post is inspired by my earlier post for Blog Action Day.