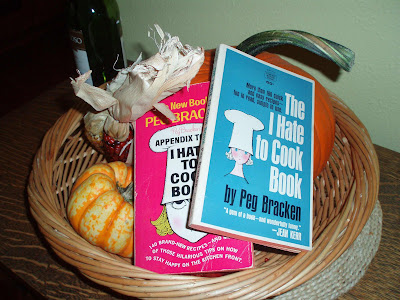 Today I read the obituary of a culinary figure whose books were popular in the 1960s: "Peg Bracken, 89; author struck a chord with the irreverent 'The I Hate to Cook Book'" by Elaine Woo, Los Angeles Times Staff Writer, October 23, 2007. My venerable copies of Bracken's most famous books -- with a 60¢ price on them -- are pictured at left.

I always found The I Hate to Cook Book and its sequels very amusing. I also learned a few good recipes from them -- especially "Cockeyed Cake" in Chapter 9, which is titled "Desserts or People are too Fat Anyway."

This chocolate cake recipe regularly appears in other easy-cooking sources: it involves a flour and cocoa mixture placed in a greased pan and then stirred briefly with oil, vinegar, vanilla, and water and baked.* Advantages: you need not have milk or eggs on hand, and you never have to wash a mixing bowl.

I Hate to Cook... offered just one cake recipe -- in Bracken's opinion, the ready-mix aisles of the supermarket "make you see clearly how far science has come." She suggests that "ready-mixes, fresh fruit, frozen fruit, canned fruit, and ice cream" should provide the solution to most dessert challenges.

Although I've read her books, I found much to learn from the article. Here are some highlights:

Peg Bracken, the dry-witted former advertising executive who relieved the kitchen anxieties of millions of readers with her 1960 bestseller, "The I Hate to Cook Book," died Saturday at her home in Portland, Ore. She was 89....

Bracken sold more than 3 million copies of "The I Hate to Cook Book," which helped busy women save time in the kitchen by cutting steps and shamelessly relying on convenience foods such as dry onion soup mix as key ingredients....

Although [Julia] Child addressed an audience eager for sophistication, Bracken -- who sold three times as many copies of her book as Child and company did of theirs -- spoke to everyone else. And although Child explained in step by voluminous step how to beat egg whites into a perfect froth or mash potatoes for gnocchi, Bracken stuck to tried-and-true basics, such as lasagna and beef stroganoff, leavened with a dash of sarcasm....

Culinary historian Laura Shapiro said Bracken wrote in a genre she calls "the literature of domestic chaos." Like Jean Kerr and Shirley Jackson (and, later, Erma Bombeck), Bracken approached the experiences of mid-20th century wives and mothers from an ironic perspective.

"James Beard used to cringe when her name came up," Shapiro told The Times. "He thought she was one of these can-opener cooks. He was underestimating her and misreading her. There was a real food person in there. She had no particular wish to get out of the kitchen. She just didn't want to be a maniac when she was in the kitchen." 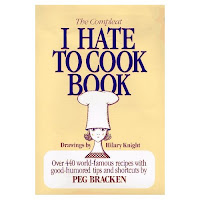 Put your sifted flour back in the sifter, add to it the cocoa, soda, sugar, and salt, and sift this right into a greased square cake pan, about 9 x 9 x 2 inches. Now you make three grooves, or holes, in this dry mixture. Into one, pour the oil; into the next, the vinegar; into the next, the vanilla. Now pour the cold water over it all. You'll feel like you're making mud pies now, but beat it with a spoon until it's nearl smooth and you can't see fhe flour. Bake it at 350 degrees for half an hour.

Over the years I have tried various changes to this, but I don't recommend any of them.

The image by the recipe shows the cover of the most recent edition, which seems to combine both volumes from the 1960s. However, the obituary in the New York Times notes: "Today, 'The I Hate to Cook Book' is out of print, doubtless a casualty of the Age of Arugula." From Peg Bracken, ‘I Hate to Cook’ Author, Dies at 89.
Posted by Mae Travels at 3:33 PM

Today's my birthday. And what am I having for the birthday cake? Peg Bracken's wonderful Cockeyed Cake! It's been a favorite for decades!

I loved her sense of humor and have all her books in my kitchen library.

Unable to remember where my copy of her book was, I looked the recipe up and found it here. Thank you!