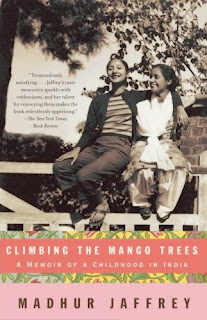 Madhur Jaffrey's memoir about her childhood offers a list of spices associated with every incident she describes. In her prologue she relates that at age four, in her grandfather's orchard, she shared with her many cousins sliced mangoes dipped in "salt, pepper, red chilies, and roasted cumin."

At the end of the book, she records the foods ritually prepared by the family and served at the final ceremony of mourning for her grandfather, "all prepared according to rules followed only on such a day." In particular, the meal included a delicate rice pudding. She continues: "The green pumpkin, cooked with cloves, fennel, and fenugreek was impossible to ignore. ... The potatoes, made mainly with ginger, tomatoes, and cumin, were simple yet extraordinary -- earthy, gingery, and hot. There were slim stuffed okra, tiny taro patties smothered with ajowan seeds.... and assorted desserts, including the rice pudding. I ate and ate until I could eat no more."

I was fascinated by descriptions of her bicycle trips to school with her books and her tiffin carrier -- and its contents. I enjoyed reading about her family's picnics where 30 adults, adolescents, and children could ride in just 2 cars. Later picnics, attended by just the high-school and college-age cousins and their friends, showed how her family's social life was changing. In every episode the most vivid element seems to be the spices.

Yes, the book lists plays she read, leading to her career as an actress. She tells stories of her relationships to parents, uncles, and cousins, who lived as one large family in her grandfather's large house and adjacent houses. She touches on her family's reaction to British colonialism and to the Partition of India -- in fact, I hadn't really realized how passionately Hindu citizens of India opposed partition and favored a united country. But the book is really about her childhood experience of food, especially spice -- her early life is shown to predestine her to be a famous cookbook author and interpreter to the West of Indian cooking.

A delicious story!
Posted by Mae Travels at 10:18 AM

Labels: Food in Literature, Posted in 2007