When I was around 12, a friend gave my mother some lamb and eggplant casserole -- a daring experiment she had cooked. She said it was a Persian recipe. I was the only one who liked it. I might have been the only one in the family who even tasted it. I started looking for new-tasting foods quite early, and wanted to try every new food that I could. I had never tasted eggplant before this, and never lamb except for lamb chops.

I think my next experience with eggplant and lamb was the moussaka in Mastering the Art of French Cooking, the first volume by Julia Child and her collaborators. Though maybe I tried some other version of this French adaptation of an eastern Mediterranean dish. 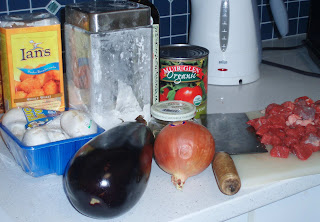 Moussaka contains many of the ingredients of the recipe I tried this evening -- as shown in the photo. Tonight's recipe is from Binnur's Turkish cooking blog -- Lamb with Eggplant in the Oven. It's a little simpler to make than the Julia Child recipe, which isn't surprising.

We ate the eggplant-lamb casserole with some mujadara (a lentil, rice, and onion dish), Greek olives, and small Roma tomatoes from Whole Foods. I haven't made a meal like this one for a while, and it was a nice change.
Posted by Mae Travels at 10:41 PM