Yes, they are fooling us

In today's L.A.Times, an article about food choices in chain restaurants:

That salad sounds healthy, but is it?
By Mary Engel

Here is the core finding of this article:


When more than 500 Californians were shown lists of four dishes served at chain restaurants and asked to identify the one with the most fat or the least salt or the fewest or most calories, 68% of them chose the wrong item every time.

Just 27% got only one of the multiple-choice questions right. And not one of the 523 Californians who were surveyed aced the test.

The four-question quiz — which focused on food served at Denny's, Chili's, McDonald's and Romano's Macaroni Grill — was commissioned by the California Center for Public Health Advocacy, a nonprofit group based in Davis, and conducted by Field Research Corp. The findings were the same, regardless of education or income levels.

The Center that did this quiz is lobbying for a law to force chain restaurants to provide nutritional information on their menus. The California Restaurant Association opposes such a law (well, duh). It's interesting that the results of the quiz look as if they are pretty much due to guessing, since each multiple-choice question had 4 possible answers.
The article was very careful in its wording about restaurants making a pretense of offering healthy options, when actually their recipes result in excesses if you eat one order of the food. They accepted the underlying assumption that people want to overeat so restaurants should provide them with what they want.
Whatever you want to say about people being happy to be fooled, or happy to have cooperation in fooling themselves, it seems to me that disclosure of the nutrition information would allow these "people" to decide for themselves whether to be fooled. My own reaction is that the restaurants are engaged in a kind of calculated deception, maybe even fraud -- and they blame the victim. 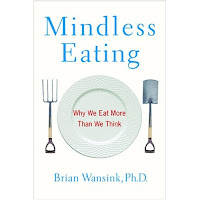 In the book Mindless Eating, the author Brian Wansink demonstrates over and over again that people, making something like 200 food choices a day, are incredibly susceptible to a variety of suggestions, illusions, and inabilities to analyze food before they eat it. It's not their fault, Wansink shows. The most memorable areas of research he reported were those demonstrating that people almost never really grasp how much they have eaten. “Stomachs can’t count” is a phrase that comes up over and over. People served larger quantities also generally ate more – and didn’t realize it. Perception of portion size is created by clues that you don’t control and rarely notice. So excessive calorie, fat, and sodium content per order confuses even well-intentioned diners.
Viewed in the context of the book's findings, I think the restaurant designers have done the same research with the opposite motive: Wansink wants to help readers eat mindfully. The fast food industry wants us to eat eat eat and come back for more. They take no responsibility for the frailties of the humans they manipulate. To quote Wansink: “Who really overeats – the guy who knows he’s eating 710 calories at McDonald’s or the woman who thinks she’s eating a 350-calorie Subway meal that actually contains 500 calories?” (p. 206)
Quotes in the article give several reasons to pass a law requiring full disclosure. The nutrition info for most fast food is available online or on tray liners that come with an already-ordered meal, but the Center representative interviewed in the article says: "I'm not sure what the industry expects. ... That we'll take our laptop to the restaurant?" Possibly the disclosure of some of the more outrageous calorie counts would even encourage restaurants to reformulate some of the menu items, advocates hope.
My consumption of food in chain restaurants is infrequent (though I'm having lunch at Panera later today). I try to stay on top of the misguided idea that a salad is always healthy or that turkey is always low-fat. But I'd really appreciate if this law were nation-wide, especially on the turnpike where I have no other choices than fast food.
Posted by Mae Travels at 9:05 AM