Another Istanbul Novel by Elif Shafak

"Istanbul was an illusion. A magician’s trick gone wrong. Istanbul was a dream that existed solely in the minds of hashish eaters. In truth, there was no Istanbul. There were multiple Istanbuls – struggling, competing, clashing, each perceiving that, in the end, only one could survive." 10 Minutes 38 Seconds in This Strange World (Kindle Locations 3100-3103). 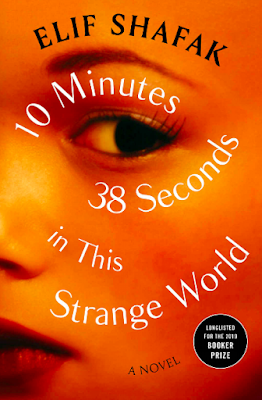 Aromas and flavors are the essence of memory. In this unusual novel, each segment of the narrator's reveries begins with a smell or taste memory. One strange thing among the many strange things in the novel, is that the narrator, named Leila, has just died, and her brain has only this brief time remaining of its lifetime of consciousness. The reader learns this at the very beginning:


"No, she would insist on the present tense – even though she now realized with a sinking feeling that her heart had just stopped beating, and her breathing had abruptly ceased, and whichever way she looked at her situation there was no denying that she was dead." (Kindle Locations 71-73).

Elif Shafak's novels, which I have enjoyed, always use aromas, flavors, and food descriptions in an original way, and this is no exception. Rather than summarize more about the plot and the very colorful characters who populate the book, I'll just quote a few of the food and aroma descriptions:

"Three minutes had passed since Leila’s heart had stopped, and now she remembered cardamom coffee – strong, intense, dark. A taste forever associated in her mind with the street of brothels in Istanbul. ... The area around the port was always so crowded that pedestrians had to move sideways like crabs. Young women in miniskirts walked arm in arm; drivers catcalled out of car windows; apprentices from coffeehouses scurried back and forth, carrying tea trays loaded with small glasses; tourists bent under the weight of their backpacks gazed around as if newly awake; shoe-shine boys rattled their brushes against their brass boxes, decorated with photos of actresses – modest ones on the front, nudes on the back. Vendors peeled salted cucumbers, squeezed fresh pickle juice, roasted chickpeas and yelled over one another while motorists blasted their horns for no reason at all. Smells of tobacco, sweat, perfume, fried food and an occasional reefer – albeit illegal – mingled with the briny sea air." (Kindle Locations 724-726).

"Five minutes after her heart had stopped beating, Leila recalled her brother’s birth. A memory that carried with it the taste and smell of spiced goat stew – cumin, fennel seeds, cloves, onions, tomatoes, tail fat and goat’s meat." (Kindle Locations 1192-1193).

"In the ninth minute, Leila’s memory simultaneously slowed down and spun out of control as fragments of her past whirled inside her head in an ecstatic dance, like passing bees. She now remembered D/ Ali, and the thought of him brought along the taste of chocolate bonbons with surprise fillings inside – caramel, cherry paste, hazelnut praline." (Kindle Locations 2079-2081).

"He wanted to know other things about her – what did breakfasts taste like when she was a child in Van, what were the aromas that she remembered most vividly from winters long gone, and if she were to give every city a scent, what would be the scent of Istanbul? If ‘freedom’ were a type of food, he wondered, how did she think she would experience it on the tongue? And how about ‘fatherland’? D/ Ali seemed to perceive the world through flavours and scents, even the abstract things in life, such as love and happiness. Over time it became a game they played together, a currency of their own: they took memories and moments, and converted them into tastes and smells." (Kindle Locations 2228-2233).

"The last thing Leila remembered was the taste of home-made strawberry cake. ... On what was to be her last birthday, her friends had settled on a rich menu: lamb stew with aubergine puree, börek with spinach and feta cheese, kidney beans with spicy pastrami, stuffed green peppers and a little jar of fresh caviar. The cake was a surprise, supposedly, but Leila had overheard them discussing it; the walls in the flat were thinner than the slices of pastrami, and, after decades of heavy smoking and even heavier drinking, Nalan rasped when she whispered, her voice husky like sandpaper scraping on metal. Strawberry cream with fluffy, fairy-tale-pink icing." (Kindle Locations 2815-2835).

In my opinion, Shafak is one of the most skillful novelists weaving the senses of smell and taste into works of fiction. I very much recommend her books to anyone who loves this type writing.


This blog post is copyright © 2019 by mae sander for maefood dot blogspot dot com.
Posted by Mae Travels at 12:48 PM

Oh, how sad is that! And how amazing, and true, too!
The scene reminds me of Cairo, it looked/was the same (way back then in the 80´s, minus the nudes, that would´ve been too much there).

Oh, if our brain/mind can survive so long, ... I remember my Grandma´s perfume, and my Mum´s. My Hubby´s from the first years (he does not wear it anymore, but me sometimes).

Once I had Börek, too. Sooo long ago, with friends. In the town I moved to so much later!

Scents and tastes, they stick forever and bring back... you know, certainly!

Oh, my. I love the concept of your first sentence -- aroma and scent. There are certain ones I will never forget.

I just can't get past she's dead and her brain lives on. Different, for sure!

It sounds like an amazing concept for a book. I'll have to check it out.