Why do so many English mysteries include food?

Food, food, glorious English food! An English murder mystery runs on meals, especially when set in a village vicarage, aristocratic country house, exotic vacation villa, the enclosed environment of a first-class train or seaside hotel, or a mansion bought with the profits from ill-gotten gains of social upstarts.

After the war, in the early 50s, Agatha Christie had to expand her settings; for example in Hickory Dickory Death, the murder victims live in a rooming hostel for students and young professional workers, but their dynamics very much resemble that of aristocratic weekenders at a country house she might have used for a 1930s setting. An Italian cook for the hostel makes dinner of "excellent minestrone... from a big tureen. This was followed by a piping hot dish of spaghetti and meat balls." But dinner is just as much a part of the story as a breakfast in that country house. (p. 23, Pocket Book Edition, first published 1955). 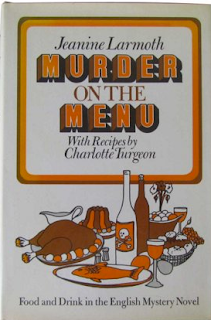 Murder on the Menu by Jeanine Larmoth is a wonderful, rather snarky, study of English murder mysteries, including Christie and the other big names -- Allingham, Marsh, Sayers, Innes, and others. Larmoth creates and explores stereotypes of all the main mystery-story characters: Lords, Ladies, butlers, maids, nannies, village spinsters, cooks, amateur detectives, police inspectors, constables (as distinct from chief constables who are higher class!), ordinary policemen, and so on. Above all, Larmoth describes what they eat.

One of Larmoth's most interesting topics is the question of WHY so much food appears in these fictions. I've often wondered that while writing about food in detective fiction (click on the link for all my posts including this one). Here's what she has to say:


"Hidden within each mystery writer is a gourmet; guiding each stroke of the writer's pen is a chef of chef d'oeuvres. If mysteries contain menus and recipes for murder, happily they contain menus and recipes for meals as well Between shudders of fear and apprehension at a past or coming crime are delightful islands where the principal consideration is the next dish, and the shudders are solely pleasurable. The aroma of herbs or fresh bread rises in the air, ginger cake lurks in the larder, a pan sizzles anticipating Yorkshire pudding, a bottle of burgundy makes a sound Margery Alligham describes... as a 'ghost of a pop; ... a beautiful sound, regretful, grateful, kind.'" -- Murder on the Menu, p. 155

Yet, after all the food scenes, Larmoth continues: "one stops to wonder 'why.' Why, and wherefore, all the food?" She cites Agatha Christie for using food as a hiding place, as a trap, as a test to see if the victim has eaten what he was alleged to have eaten, and as a vehicle, of course, for poison. She lists several more practical reasons in plotting mysteries.

"Food indicates setting," as in a country weekend at a great house, for example. Food descriptions among the detective's activities show the reader "This is not ... a story being told; this is real life. In mysteries, food is, in fact, one of the few means of creating an impression of life... giving a sense of reality." (p. 157)

"The Proof of the Pudding" is the title of Larmoth's last chapter, and her conclusion is:


"When the last fork has been laid on the plate, the last crumb of a treacle tart has been eaten, the last Admirable Eccentric has daubed his mustache with a starched white napkin... the case is definitely proved. Not against the murderer. For a way of life.

"The case for thin slices of bread and butter with tea, and drapes drawn, before rising in the morning.... The case for buttery muffins, grandmother's receipts, brandy for the fainting, meat pies for the police, curry for poisoning. For butlers serving breath-light soufflés, and solicitously bending over one's chair. ...

"We have tasted, smelled enjoyed -- for all of these can be done with the imagination. ... The only thing we haven't done is eaten, really eaten. This, for all our authors' care, is up to us. ... There is nothing to do but to step hastily into the kitchen, and serve it forth." (p 253-255)

Published in 1972, Murder on the Menu could be a perfect description of many later TV series about English aristocracy; in fact, it was evidently written at about the same time as the production of "Upstairs Downstairs," the series that began in 1971 and helped define a TV genre.

Most chapters of this book include an impressive set of appropriate recipes -- like "Library Snacks," "The Post-Funeral Lunch," "The Tea-Trolley," or "The All Day Buffet." In reading the recipes, I wonder: exactly how wonderful was the food in those idyllic yet fatal settings? It's often very bland, and the meat recipes sometimes call for hours of simmering or boiling what might be nice cuts of pork, beef, veal, or even a chicken. The recipes given in the book are probably quite authentic, as they were written by Charlotte Turgeon (1912-2009). Note: Turgeon was the translator of the Larousse Gastronomique and other French cookbooks. A college classmate of Julia Child, she remained Child's lifelong friend.
Posted by Mae Travels at 8:25 AM

It's time for me to visit Amazon -- I don't think I'll find this one locally! And it sounds "just my cup of tea," if I may follow up on the theme! It sounds fun and accessible. And I have to add, Mae, that every time I read one of these mystery posts, I look at by towering book stack with a little less anticipation and ease a bit closer to the bedroom bookcase where all the Christies are stacked (along with more than a few others of the mysteries I can't part with!). You may well be creating a monster!

I guess I'm with Jeanie too, I need to visit Amazon. Love mysteries and certainly any food featured has my attention!