"Dining Out: Menus, Chefs, Restaurants, Hotels & Guidebooks” opened last Thursday at the Hatcher Graduate Library, University of Michigan.
Besides display cases with menus from every state, the exhibit's hanging panels feature distinguished chefs and their restaurants, collections of menus and memorabilia from Ann Arbor restaurants, and documents from the California food revolution, especially Alice Waters' Chez Panisse restaurant and its chef Jeremiah Tower. Also there are menus from famous New York restaurants, menus from railroad dining cars and ocean liners, books about menu design, and many other fascinating themes. 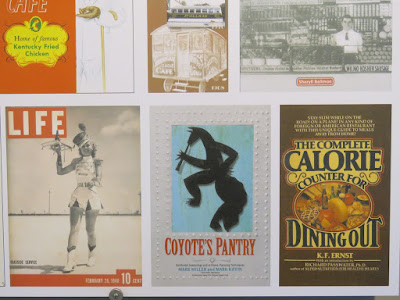 Exhibit organizer is Jan Longone, adjunct curator of culinary history at the library. Documents on display include many that she had donated from her extensive collections, now in the Janice Bluestein Longone Culinary Archive (JBLCA). Two display panels based on her donations are titled "Conserving Catalan Cuisine." These describe Jan and her husband Dan's experiences at El Motel Hotel and Restaurant in Figueres, Spain, and particularly photos and other items from the restaurant's 50th anniversary gala in 2011. Jan and Dan enjoyed "local, traditional, and seasonal foods" prepared from game, fresh fish, wild mushrooms and more by three generations of a family of restaurateurs. Salvator Dali, a patron of the restaurant, designed several of the menus on display.

“Dining Out: Menus, Chefs, Restaurants, Hotels & Guidebooks,” runs from August 20 through December 17, 2015, at the Clark Library on the second floor of Hatcher Graduate library. A related lecture by Jan Longone takes place on November 12.
Posted by Mae Travels at 4:09 PM

I enjoyed your post about Gertrude Stein – I have the same books you showed. I also read the book “Charmed Circle, Gertrude Stein and Company” by James R. Mellow, it’s 616 pages, a paperback out of print but I got it on ABE (I read it slowly…) and also, after that, “Staying on Alone, the Letter of Alice B. Toklas” by Alice B. Toklas. Then when the Metropolitan Museum of Art in NY had an exhibition of all the work Gertrude had collected I dragged my husband to go and see it – it was super.

I’d love to see this menu exhibition. I have some old ones that I kept – mostly family wedding menus. I don’t know if it is still done but when I went to weddings in France there was always a menu printed for the occasion. My mother had also bought pretty blank menus, and when we had a formal dinner at home with guests she would write the menu to be placed on each guest’s plate. When I came to the US and made dinner for special friends I would also have a menu printed for the occasion then I realized that it was not done here. The worst was that I used crystal, china, old embroidered napkins, silver napkin rings, sterling silver and crystal bottles, 4 different types of glass for wine, and more in addition to the menus and I think it scared my guests because they rarely invited me in return. That made me sad until one of them told me they were afraid to invite me for their dinners, where you helped yourself and placed the plates on your knees. So I have not had one of my French gourmet meals in a very long time – I kind of miss them.

This looks like BOATLOADS of fun! How long does it continue? Quite some time back I bought an old scrapbook of mostly menus at an estate sale! Fun! And the Sugar Bowl Restaurant in Gaylord has a long hallway with vintage area and restaurant-related photos including some menus. We were looking at them this summer and were a little shocked how prices had changed, even in 30 years! I'd love this one, Mae!

I've lots to catch up on with you! And I'm looking forward to it! May not comment on every one, but I'll definitely read them!