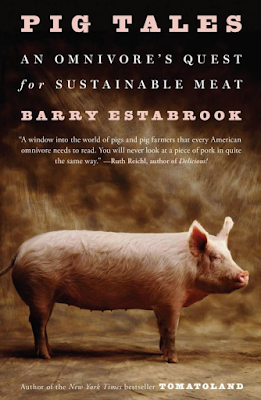 Pig Tales: An Omnivore's Quest for Sustainable Meat by Barry Estabrook comprehensively documents everything he could find about the pig as an intelligent and likable creature, about raising pigs in the US (and a bit about Denmark), about corruption or laxity in US regulation of the meat industry, about overuse of antibiotics in factory farming, about humane vs. cruel treatment of the animals, and more.

The good parts of the book described happy farmers raising pigs in a way that the author believes to be sustainable and responsible. There aren't many of them! I think I'm buying meat raised with some of the good practices as applied to the pork sold at Whole Foods where I shop. Whole Foods says they allow no antibiotics, hormones, or animal byproducts in feed, and require humane practices with regard to bedding for animals and prohibition of crates. It's worth the extra money.

The parts of the book about evil practices in industrial agriculture were hard to read: I had to force myself to keep learning about cruelty to animals, cruelty to slaughter-house workers, dangerous bacteria emerging as a result of irresponsible practices, and environmental damage caused by industrial pig farms. That is: unimaginable damage to the environment, to neighboring farms and residents, and to the downstream users of polluted rivers.

Industrial agriculture is a constant topic for journalists and food writers, so there's nothing totally surprising -- except that I always find it so easy to put it out of mind when I'm done. Antibiotics are used to stimulate animal growth and to treat the illnesses caused by irresponsible treatment of animals. Excesses of antibiotics encourage lethal strains of resistant organisms to flourish. Some people contract infections. Some die. It's horrible, and Estabrook describes it all.

Today I read an article that's about beef, not pork, but that documents the current situation, in agreement with Estabrook. Consumer Reports' laboratories tested "300 samples (458 pounds) of raw ground beef — 181 samples of conventionally raised beef and 119 samples produced using more sustainable processes, like antibiotic-free, organic, and grass-fed — from supermarkets, big-box, and 'natural' food stores in 26 metropolitan areas across the country."

Test results showed fecal bacteria in all samples -- so my decision about buying at Whole Foods doesn't solve every problem. However, the Consumer Reports tests found:

Many bacterial infections can be treated with antibiotics, but there is a growing concern about drug-resistant superbugs. A number of samples in the CR tests turned up the presence of bacteria that is resistant to multiple drugs, and there was a noteworthy difference between conventional and sustainably sourced beef.

As well documented in Pig Tales,  the situation calls for better inspections and more controls:


Consumer Reports is calling on the FDA and the USDA to ban the daily use of antibiotics in healthy farm animals; ensure that meaningful labels are not undermined by labels like “natural” which have nothing to do with how animals are raised or what they ate; beef up (pun intended) USDA inspection practices, including having an inspector at every slaughter and processing plant; and ban the sale of beef containing disease-causing, antibiotic-resistant salmonella; and prohibit the presence of chicken waste in cattle feed.

What a thought provoking book. I love the cover illustration.