I have just read Bee Wilson's book Swindled: The Dark History of Food Fraud, from Poisoned Candy to Counterfeit Coffee. Food adulteration with poisons (like lead-based or cancer-causing dyes), with unreasonable additives (like alum in bread), or with cheaper substances (like adding water to milk or injecting chickens with dilute broth) has been a problem for centuries, as documented throughout the book. Outright cheating by false labeling, false weighing, or overcharging customers is another fraud that's far from new.

"The rich can eat unadulterated food without much bother, whereas for most of the poor, it is a constant effort." (p. 101) Poor people have suffered more than those with the resources to purchase better quality foods and the time and energy to pay attention to what is happening. But money is far from an adequate protection against food frauds. "The motive to swindle -- greed -- is a constant in human history," Wilson writes. (p. 322)

Swindled is closely related to several other books I've read, but has an interesting approach to the topic of food safety and food regulation. Wilson profiles a number of crusading chemists, medical doctors, journalists, and others who have attempted to inform the public about major problems in the food supply. Their efforts were sometimes successful, sometimes not, but she uses their discoveries to illustrate exactly what frauds were common at several times in the past. Wilson also adds a number of other historic and ongoing frauds into her narrative, up through recent baby-milk scandals in China. Swindled was published in 2008: I wish it continued right up until the present.

Here are some of the most interesting people I learned about:

Swindled is an enjoyable book despite the depressing subject matter, because it's engagingly written. I enjoyed the many anecdotes and factual discussions of food frauds in the past, including examples of recipes for "mock" dishes that playfully imitated real foods without including the "real" ingredients. The book also offers lots of amusing illustrations like this one (p. 98): 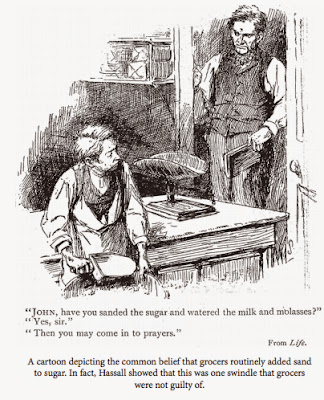 Sometimes I just have to stay away from books like this Mae. I could become anorexic. After I read books like these I have such a difficult time eating, seriously. I'm still having a time eating fresh, organic spinach! By the time I'm done washing it, and dousing it, it is no longer fresh spinach!

I give you credit for digesting it all. I do know the name Wiley, I did a post on him somewhere.

Hi Mae, getting back into the swing of things! This looks fascinating but extremely creepy and like louise said, I sometimes have to stay away from books like this. CNN is scary enough! But I do love those illustrations!