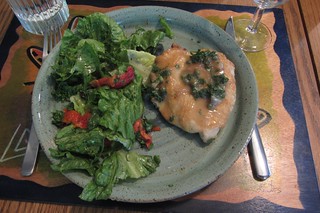 Chicken Piccata is an old favorite, featured at traditional restaurants and often cooked at home, for example by my sister-in-law. Thanks to her mentioning it, I started thinking about this classic.

Served with garlic mashed potatoes, Chicken Piccata is on the menu at Merriman’s Cafe in Waikoloa on the Big Island of Hawaii where we are currently on vacation. The cafe is a spin-off of Merriman’s restaurant, one of the originators of Pacific Rim cuisine in the 1980s. Perhaps oddly, Italian/Mediterranean food is very much a part of Pacific Rim cooking. (We speculate that it's because of the longstanding Italian traditions of San Francisco, which IS on the Pacific Rim!) 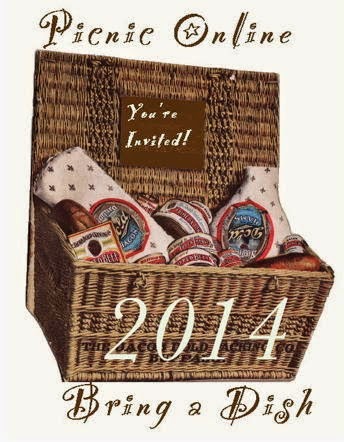 When I decided recently – a few weeks before my trip –  to try making Chicken Piccata, I found a recipe on Epicurious, but I changed it in several places and especially, I simplified the cooking technique. My recipe made around 5 servings. We ate some hot from the oven with salad (shown above) and some cold with additional parsley: perfect for a picnic.

Specifically, it’s just the thing for the 2014 Picnic Game
sponsored by Louise at Months of Edible Celebrations.

To start the game, all participants have promised to go through the alphabetical list up until the letter of our own contribution, just like the old kids’ memory game. In this game, though, we link to the blog post and recipe of the other picnic goers: just click on the caption of the images for A and B below.

So here it is: I’m going on a picnic and I'm bringing: 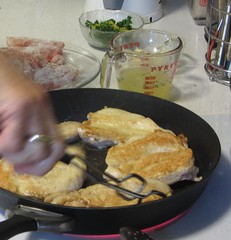 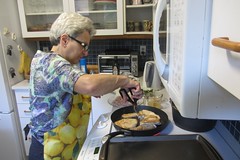 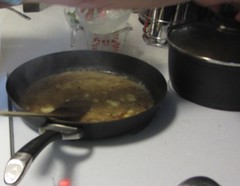 We once had a conversation about chicken piccata with a rock star, the drummer from Cold Play. His wife's uncle is a good friend of ours, so we got to go backstage to meet him at a concert in PA 5 years ago. Our friend was here for a conference at which one of the banquet choices was chicken piccata, so he asked what it was. After the conversation, we were Googling both the dish and the rock star, and noted that the rock star had somewhat more hits than the dish. When we got a chance to meet him back stage, we didn't really know what to say to him, so Arny mentioned that he had more hits than chicken piccata, to which the response was "What's chicken piccata?" So Tracy told him about it, thinking "I can't believe I'm talking about chicken piccata to a rock star."

Well, look at you preparing Chicken Piccata for the Picnic Game. I'm impressed:)

I would never think to bring Chicken Piccata to a picnic but now that you mention it, it makes perfect sense!

It sure looks delicious Mae, and definitely worth the excitement. (You really, really wanted to bring it this year:) I'm so glad you did! We are going to have another delicious picnic and I wouldn't be surprised at all to see everyone hanging out at your blanket, if only for a whiff:)

Thank you so much for "playing" Mae. "See" you at the picnic and enjoy Hawii!!!

I love Chicken Piccata, too! Yours looks wonderful, and your idea of using it cold for the picnic is perfect.

Nice meeting you. Lovely dish you brought along for this picnic.

Lovely recipe, Mae. The Picnic Game is always fun and isn't it great to be at the beginning of the alphabet?
:)

I am glad you are bringing this and I know you will save me a piece of that delicious chicken because I am asking so nicely.

Looks delicious. You are at my favorite Hawaiian island. Have a great time:)

Your chicken piccata looks delicious! I'll be coming over to your blanket at the picnic! See you!

Yum! This is such a tasty dish to bring along.

Nice meeting you Mae! Your chicken piccata looks so scrumptious. I am salivating here. I'm going to pack a piece or two away if you don't mind.:o)
Hope you're having a fabulous weekend.
Blessings, Kristy

Mae so glad to be joining you on this picnic…hope I get to try some of your lovely Chicken Picata! It sounds delicious! Love your blog and hope to visit you often! See you at the picnic!

Sounds like you Chicken Piccata is a hit Mae! Thanks again for joining in on the festivities!

So happy you are coming to the picnic Mae. Chicken Piccata is one of my favorites!