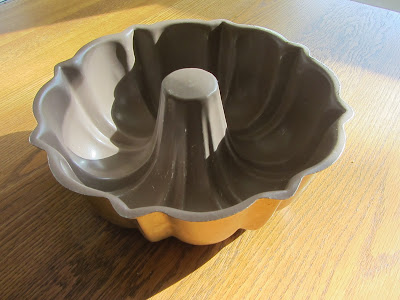 Here's my empty Bundt cake pan, posing in the afternoon sunshine. Today is Bundt Pan Day, in honor of the 60-somethingth anniversary of the first Bundt pans being sold by the Nordic Ware company in Minneapolis. I'm not making a cake for Bundt Pan Day for a variety of reasons, but I took out my pan just for fun. You can see that the old-style nostick finish is somewhat scratched: not surprising, since I've had the pan since some time in the 1960s, possibly even before the famous Tunnel of Fudge winner of the Pillsbury bake-off in 1966. Anyway, my Aunt Bernadine gave it to me around that time, and I've used it -- just not today.

Here's a quote from the website of Nordic Ware about the founder, H. David Dalquist, who died in 2005:


"In 1950, the landmark pan was introduced, after the Minneapolis Chapter of the Hadassah Society asked Dave and Dotty to produce a kuglehof pan, similar to the one the society's president had received from her grandmother in Germany. Dave produced the pan from cast aluminum for the Hadassah Society and a few for the Nordic Ware trademark, which he sold to department stores using the name, bund pan. (The word bund means a gathering--thus a bund cake, with its characteristic fluting, was a cake suitable for a gathering or party.) Nordic Ware created the pan and filed for a trademark to protect its creation, renaming the pan the Bundt pan."

For its first 10 years or so, the bundt pan was mainly popular among American-Jewish women, who were recreating traditional cakes from their Eastern European and German-Jewish origins. According to Wikipedia (which has convincing footnotes for the claim) -- "Uses of the word 'bund' to describe cakes outside of Europe can be found in Jewish-American cookbooks from around the start of the 20th century. The alternative spelling 'bundt' also appears in a recipe as early as 1901." These references are to two famous Jewish cookbooks: Aunt Babette's Cookbook (1889) and The Settlement Cookbook (1901).

I thank Louise at Months of Edible Celebrations for pointing out Bundt Cake Day!
Posted by Mae Travels at 2:41 PM

What a fun post, Mae! Considering the age of the Bundt Pan of yours, I'd say "she" looks pretty darn good!

Now, you need to bundt, lol..Have a GREAT Bundt Day Mae and thanks for sharing...

I just remembered, your link winding up under "nourishments" all by itself. I wonder if it has anything to do with you linking directly to my blog name? Interesting...