Thanksgiving Pictures from "Art and Appetite"

"It may be hard to fathom today how Lee's colorfully cheerful depiction of food preparation was offensive... . The picture was popular with the public, as was Grant Wood's more famous American Gothic, purchased by the Art Institute in 1930. Both pictures represent historical themes using the imagery of ordinary people and farm life; both enshrined with irony and humor an American past fast disappearing. But by 1935 the depiction of Thanksgiving as a rustic social gathering seemed boorishly common." (Art and Appetite catalog p. 41)

I love the kitchen in this picture with all the activity of many women cooking, except for the one who has obviously just arrived and is taking off her hat. I love the little kids, the dog under the stove, and the cat under the table. The preparation for each traditional element of Thanksgiving dinner is wonderful: the turkey being basted, pie dough being rolled out, vegetables in a basket, pots simmering on top of the old black stove, dishes being taken from a high shelf where no doubt they spend most of the year.

"... the bird collapses in the kitchen sink, looking as though it had just been thrown from the guillotine. Its legs splayed akimbo, its body bloody and pimply, it drains alongside Ajax, sponges, soap, and the breakfast dishes. Neel said of her picture that she painted it while the bird ... ws thawing in the sink and that it was her answer to Pop Art." (Art and Appetite, p. 51)

My own feeling is that this image of an absolutely typical kitchen from the 1960s is now as much nostalgic as the famous Norman Rockwell grandmother and grandfather with a turkey or the painting by Doris Lee above. Who hasn't seen the exact water faucet, Ajax can, and metal cabinet handles along with the white porcelain of mother's or grandmother's or aunt's kitchen sink?


"The bird as solo subject mirrors modern advertising's emphasis on appearances and the embedding of implied meaning within objects." (Art and Appetite, p. 49)

When I first saw pop art, I loved what it said to me about the role of advertising in creating the way we see our surroundings, especially in the way we see food and food packaging. Who can resist the word "iconic"? 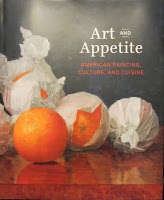 I've mentioned the exhibition "Art and Appetite: American Painting, Culture, and Cuisine," currently showing at the Art Institute of Chicago, and the catalog of the exhibit with the same title. The first essay in the catalog is "Thanksgiving: The Great American Food Fest," written by Judith A. Barter, which I've quoted above.

The remainder of images are just as fascinating as the ones I've chosen here -- including many magazine illustrations from the 19th and 20th century. Through art and illustration, we see the history of the holiday. As I said a few weeks ago, I wish I could get to this exhibit, but I'm really happy to have the catalog.
Posted by Mae Travels at 9:38 PM

These are just fabulous examples of food art and perfectly timed for the holiday! I hope your Thanksgiving is very happy.