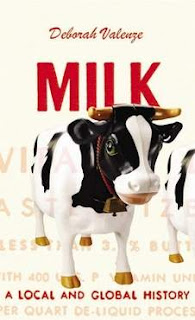 This week I read White Bread: A Social History of the Store-Bought Loaf by Aaron Bobrow-Strain and Milk: A Local and Global History by Deborah Valenze.  While both books have a vast amount of important and interesting history and cultural information, I found White Bread by far the more enjoyable reading.

I had to force myself to finish Milk. Normally I like histories of foods that begin in ancient times and go into lots of detail about the Middle Ages etc. But this one seemed to choose rather tedious aspects of the development of milk-drinking, the constant tension about the best foods for newborns and infants, and the dangers of poorly handled milk and how, often adulterated or spoiled, milk even could kill consumers, especially children.

I could hardly put down White Bread. So I think I'll mainly talk about this, the book I liked. The focus on the politics of bread, which in the past provided a substantial percent of people's daily nutrition, energizes the book, and motivates the historical material. Although bread is no longer the crucial dietary element it once was, the author makes clear how it still plays an enormous symbolic role, including in the recent fad of eliminating it from the diet on the basis that it has either carbohydrate or gluten which faddish theories have determined are dangerous despite a lack of scientific evidence.

You would have to be culturally tone-deaf to be unaware of the use of the term "white bread" as an accusation casually thrown at groups of people one doesn't like or approve of. The context in which this insult emerged is carefully described, bringing out the ironies of the fact that many people of color in fact are fond of white bread, while the advocates of artisanal bread tend to be upper class and mainly white.

Bobrow-Strain explores the historical emergence of white bread and its promise in various eras, mainly in 20th century America. He shows that the development of industrial -- and thus admired -- baking began with scientific diet advocates who deplored the unsanitary conditions and unreliable products of artisan bakers in urban areas. (He explicitly expands on the topics in the book Perfection Salad, which I also read recently.)

A hundred years or so ago, well-meaning nutrition advocates frequently characterized bakers and small-bakery owners as dark-skinned immigrants lacking knowledge of hygiene; the neighborhood bakeries where they worked were usually in cellars, contrasting to the emerging factories where tens of thousands of loaves a day were baked with virtually no contamination from human hands. Advertising of the newer and more modern bread stressed how sterile it was; many such bakeries had windows opening on the production lines and invited the public, including school children on field trips, to come watch. (I distinctly remember going on such a trip in around 4th grade to see packaged white bread being baked.)

A major extension to the propaganda that white bread was purer and more healthful than dark breads was the requirement to use vitamin-fortified flour in all bread. The requirement was a response to the unfit physical state of military recruits at the beginning of World War II -- the damage done by food insecurity during the Great Depression had produced skinny, weak youth. Merk pharmaceuticals and the baking industry found the recent discovery of fortifying vitamins, especially thiamine to be a great money-making opportunity, and allied with the FDA to create enriched bread.

Further chapters explore the introduction of industrial white bread to various third-world countries (such as Bimbo bread in Mexico). The book becomes really fascinating as it describes the backlash against industrial white bread that became part of the 60s counterculture. Bobrow-Strain doesn't just tell this story as a myth, as often happens. Rather, he gets into a variety of issues and questions about the people who advocate for home baking, revolt against industrialized food, and self-sufficiency. Most interestingly, he points out how both left and right wing ideologies have become advocates for some of the same issues of self-sufficiency, living off the grid, and revolt against certain types of conformity and government regulation.

My favorite question, as he expresses it, asks who has "the power to declare things 'natural' or 'unnatural.' If we honestly and passionately love the taste of store-bought white bread, why isn't that a natural craving? ... what -- and who -- gets left out of this picture?" (p. 87)

Five seductive dreams about food, the author says in his conclusion, are the repeating themes of the book: "dreams of purity, naturalness, scientific control, perfect health, and national security and vitality. Each of these dreams rose to prominence because it crystallized deep currents of longing and anxiety -- and thus galvanized action." Seemingly innocent dreams, yet they "framed the problems of society and the food system in dubious ways."  (p. 190)
Posted by Mae Travels at 6:22 PM

Mae-- thanks for this engaging review that informs us so well .