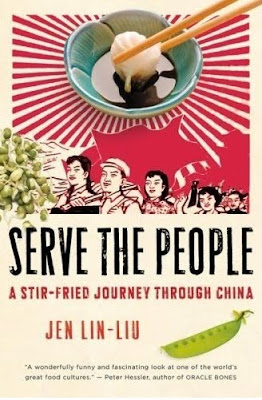 Do westerners really want to try authentic Chinese food? Jen Lin-Liu's food memoir Serve the People: A Stir-Fried Journey through China leaves the question open as it discusses the opinions of restauranteurs that she gets to know on her journey.

I enjoyed reading her stories about people she met. Through these people she introduces you to a history of recent events in China and how they affected individuals in the food business, often assigned to work in food prep or service by the indifferent bureaucracy of the Communist era.

I also liked her descriptions of food: "I blew on the noodles impatiently, then risked a first bite amid the steam and burned my tongue," she wrote. "Nevertheless I knew that I was in the presence of the best noodles I had ever eaten. They were thin and chewy: the broth was smooth and slightly spicy. I detected hints of peanut and sesame, which smoothed out the chili-and-coriander flavored soup." (p. 123)

She tastes. Then she works in a small, working-class noodle shop learning to grate the dough. She discovers how much strength and energy a cook must exert. Through her experiences she also makes the reader see how different it is to make dumplings or noodles for home use or make them fast and in enough quantities to make a living at a small restaurant in a huge Chinese city. Recipes in the text underscore the way that ingredients are used in each situation -- I may never try one, but they contributed to my grasp of what I think she was trying to say.

Lin-Liu differs from most westerners writing about Chinese food because she rarely makes comparisons between American mainstream Chinese restaurant cooking and that in China. Her main experiences with Chinese food in the US were with home cooked meals and family memories of holiday food celebrations, such as moon cakes. At home, moon cakes were a seasonal treat filled with lotus root which is extremely sweet and indulgent. Each cake was divided and shared by her whole family. In China she learned that moon cakes had become a status thing, given as gifts or as bribes (with money or other valuable stuff in the wrapping) -- but never eaten. Poor people bought them from the richer recipients and resold them.

The author was raised in California; her parents had immigrated from China via Taiwan. They were amazed when she decided to spend years in China attending cooking school, apprenticing in noodle shops and upscale restaurants, and writing for restaurant guides. The result is a good read!
Posted by Mae Travels at 7:37 AM