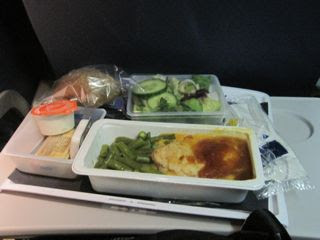 Here's something we haven't seen in a while: a hot airline meal from a still-functioning airplane kitchen. Just the same as the meals in the past when you saw them on every flight. Strange puree (potato? applesauce? a mixture?) and orangish gravy over a small slice of rubbery chicken breast, off-green beans (canned?), salad, small cello-covered brownie, cheese, crackers. But Delta did include it in the price of the ticket. Since they woke me up to give it to me, I ate some of it. Then we were wakened again by a woman whose mother couldn't wake up -- we heard increasingly urgent and loud calls, "Mom, Mom, Help, Help." No doctor responded to the subsequent call, but the stewardess nobly gave the woman oxygen and got her to wake up and the drama was over. Then we were wakened an hour later for breakfast and landing at Shannon airport. Not much sleep.

Ireland looks beautiful and green, with strange slanting winter sunlight. We walked along Galway Bay in a very stiff wind. I hope to post much more beautiful photos than this!
Posted by Mae Travels at 12:54 PM

Yikes -- sounds quite the flight! But oh, Ireland! What a grand adventure you are on -- I can't wait to read more about it!

I do hope you will be sending home some Irish Coffee. If memory serves me, I do believe it was "invented" right at the Shannon airport.

Have a wonderful time, Mae. Take lots of pics for us to nibble at...