What did Colombo eat? 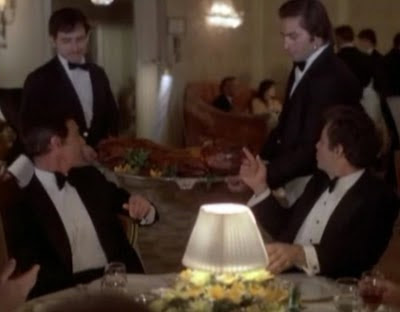 Colombo, the 1970s TV detective played by Peter Falk, always seemed to be a bumbling and ineffective investigator -- but then, "Oh, just one more thing." With those words he'd ask the question that proved the guilt of his suspect or put key information in perspective. Now the series is a classic of TV detective fiction. 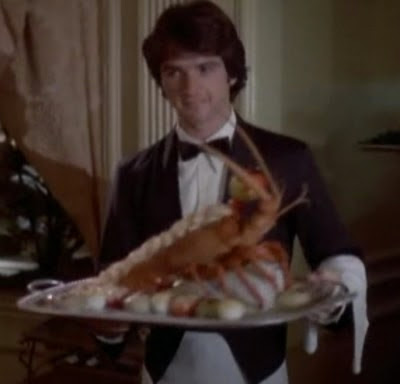 The episode "Murder Under Glass" begins with a look at a preposterously arrogant film critic and TV food star named Paul Girard. Besides posturing about his extensive food knowledge, Girard is obviously engaged in some type of dubious finances, and within minutes of the beginning of the episode, he prepares a vial of toxin from the notorious blowfish -- the Japanese fugu.

When a restaurant owner dies of poison, we -- and Colombo -- know that Girard did it. But HOW? The poison was in a bottle of wine that had not yet been opened when Girard left the victim. Why was the restaurant owner furiously angry with Girard just before his death? What was the motive? Colombo's job is to discover all.

Colombo's investigation involves interviews with a number of other restaurant owners, learning how they too were being victimized by the critic's extortion racket. At each step of the investigation, Colombo is offered delicious and showy delicacies. Galantine of duck with pistachios. A Chinese tea lunch (then unusual, now completely recognizable as Dim Sum.) A Japanese Kaiseki dinner complete with accompanying Geishas -- and then unusual sushi, including fugu. Mushrooms stuffed with crab and bechamel sauce. Eggs in aspic. A beautiful coffee cake. You get the picture: the most over-the-top restaurant dishes of the 1970s were recreated for this purpose. And Colombo appreciates every bite. 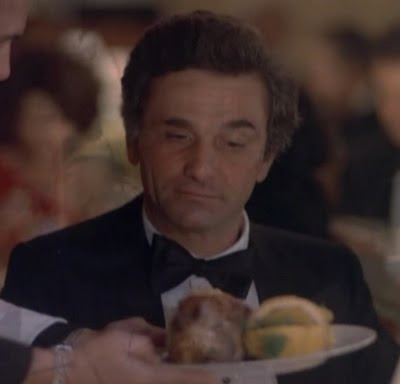 After all these interviews, the restaurateurs, Colombo (in a tux instead of his usual ratty raincoat), and Girard all attend a formal banquet for restaurant owners and food writers. A whole series of such dishes are paraded out of the kitchen: a suckling pig, a large platter of lobsters, whole small birds, fish in jellied sauce and many more. Pictures from this scene appear at left.

The final confrontation between Colombo and Girard takes place as Colombo himself prepares an elaborate veal scallopini, explaining each step as he tightens his case and Girard squirms suavely. Girard opens another bottle of wine and tries to repeat his murder scheme. Of course that scheme fails. Colombo switches the glasses and explains to him (and to us, the audience) exactly how the original murder was done.

It's a wonderful visual journey through high level restaurant culture of the 1970s. Before the Food Network. Before New Cuisine of all sorts. Before sushi was available in every small town in America. And before Anton Ego the critic as arrogant as Girard encountered Remy the Rat in Ratatouille. What fun!
Posted by Mae Travels at 11:57 AM

How did I ever miss that episode? I loved Columbo -- and of course you know I love food! Is it on video? That would be a series worth watching again!

I saw it on Netflix streaming video -- you can also rent it from Netflix. Or probably get the DVD from some other source.