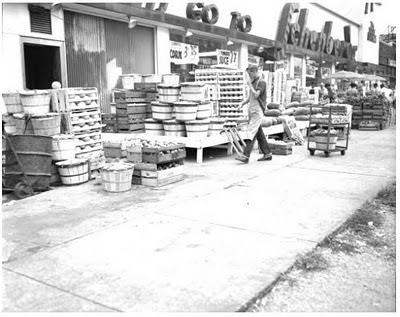 Recently, I've posted photos of some of the markets where I shop these days. I was browsing a collection of historic photos of places I've lived, and found two photos of the markets where my parents frequently shopped when I was in elementary school. Above is a market called Schenberg's. I don't recall quite so much merchandise stacked outside. My father (who did most of the grocery shopping) preferred it to most others, until later when he switched to A&P. In fact these small independent stores weren't really able to compete with the big chains.

Below is the Loop Market, which my parents definitely didn't like much, though I recall going in there from time to time when I was sent to buy something. In the background of this photo you can see the distinctive octagonal City Hall of University City. At right you can see the streetcar tracks and just a bit of a streetcar making the "loop" around the building, from which it would then return to downtown St.Louis. 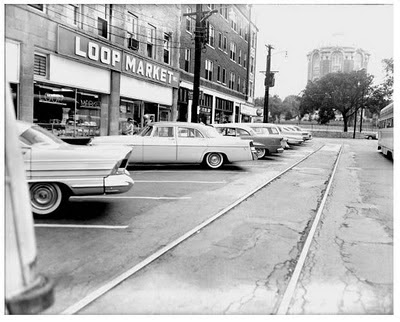 I was also very excited to see a photo of the Dime Store that I shopped in as a child -- including a typically dressed family being helped by a friendly policeman, just like in the beginning readers. My friend Dorothy and I would go there and look at dolls and doll clothes. She had money for doll clothes, and so her dolls were better-dressed than mine were. Later, we shopped there for jewelry and for makeup. 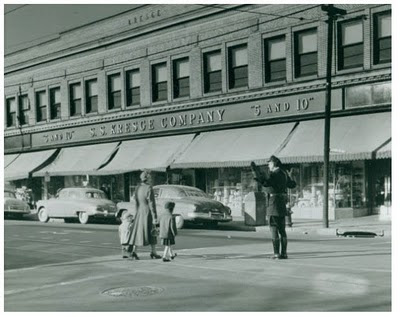 UPDATE: Here is a photo of Moll's Market, where my mother shopped in my early childhood. We had no car, and I remember walking several blocks from our apartment with my sister in her Taylor-Tot (a type of stroller). This is the only photo I can find, and it's very little, but you can see the displays of produce on the sidewalk. It was quite a luxury market, with an in-store bakery with glass cases full of beautiful cakes. The family favorite was a really delicious lemon layer cake, sold by the slice. I've never had anything quite that good.
Posted by Mae Travels at 4:14 PM

You have a lovely blog - I found it while looking for photos of Elizabeth David.
These photos are great! I recently looked for old photos of my hometown, and saw a picture of our grocery store that had our orange VW Bus in the parking lot - a very recognizable car.
And I too remember the early readers with the helpful policeman - fun to see a photo of that.

I haven't heard the word "Taylor-Tot" in ages! I simply love these photos -- I wish I had some of the places I "frequented" (probably in a taylor-tot or sucking the strap of the metal cart!) when I was a kid. These are real gems!

And the Kresge one -- that REALLY brought back memories. How I loved the dime store and wish there were still some originals around.