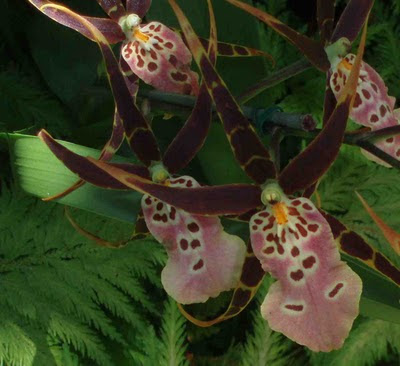 Nero Wolfe had unusual taste. He grew orchids and experimented with recipes that by modern standards (and probably also those of his own time) were plebeian. In Black Orchids, exotic black orchids serve as a backdrop to murder, and excite a weak point in the sort-of infallible detective.

I don't even know if there's such a thing as a black orchid: the few plants that Nero Wolfe obtained were unique in the whole world so I guess Rex Stout didn't really think there were any. I think orchids look more like the ones in the Botanical Gardens near Hilo that I photographed a few years ago. Nero Wolfe loved the rarity, and for that was willing to do detective work that he might otherwise scorn. He spent a good part of each day in his orchid greenhouses, which play a role in every Nero Wolfe mystery I've read thus far.

Wolfe was willing to go the extra bit for a recipe (in some books, more than a bit). I find it odd that the recipes in the books I've read are not in the least what I would call an exotic. In the book Black Orchids, the great and large detective is seeking a recipe for a perfect corned-beef hash. Lowly corned-beef hash. If it wasn't lowly, why would a cheap restaurant be called a hash house? Well, that's my opinion, not the master's.

Nero Wolfe was delighted when a southern belle named Maryella revealed the secret ingredient for corned beef hash to Wolfe and his cook Fritz. She came into the kitchen (she was involved with some quite dubious characters, but pure, and coming in because she was a witness to something in a case). She leaned over. She peered into the bowl where Wolfe's hands were about to go into a corned-beef mixture and --

"Excuse me," she said... "but corned beef hash is one of my specialties. Nothing in there but meat, is there?"

"As you see," Wolfe grunted.

Wolfe scowled at her. I [that's Archie, Wolfe's sidekick and the narrator] could see he was torn with conflicting emotions. A female in his kitchen was an outrage. A woman criticizing his or Fritz's cooking was an insult. But corned beef hash was one of life's toughest problems, never yet solved by anyone. To tone down the corned flavor and yet preserve its unique quality, to remove the curse of its dryness without making it greasy -- the theories and experiments had gone on for years. He scowled at her, but he didn't order her out. ...

"Now you just calm down." Maryella's hand was on his arm. "It's not ruined, only it's better if it's coarser. That's far too much potatoes for that meat. But if you don't have chitlins you cant ---"

So the secret ingredient in the plebeian corned-beef hash is the even more plebeian chitlins. Corned-beef hash one of life's toughest problems? Chitlins a cosmic solution? Is Rex Stout playing a joke on all his readers? The book was written before I was born, so I think the cultural and food environment has changed so much that I might never know. 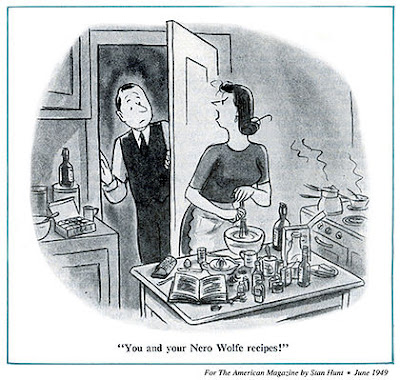 At least one other blogger has commented on Nero Wolfe and his recipes, mentioning a cookbook dedicated to the detective's culinary creations. This blogger even found the delightful cartoon. See: Some Came Running...

As the blog author wrote: "I can still envision the comic possibilities inherent in the spectacle of my cleaning several pounds of pig chitlins for homemade corned-beef hash."
Posted by Mae Travels at 5:30 PM

You know, for as much as I adore food and cooking AND mysteries, I've never read a Nero Wolfe. OK, now I know what the next bookstore visit will bring!

I've written a few other posts about Nero Wolfe -- I also spent years never getting around to reading the books, and first read one in January.