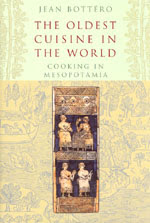 Five thousand years ago record keepers in the early civilization of Mesopotamia invented cuneiform writing on clay tablets. In the hands of modern scholars, half a million of these tablets have revealed the lives, customs, literature, arts, technology, folklore, military history, political life, mythology, and religion for thousands of years of this civilization.

Among the half-million tablets, many record foodstuffs, but only three so far seem to have recorded actual recipes. Cuneiform expert Jean Bottero in The Oldest Cuisine in the World: Cooking in Mesopotamia (Chicago, 2004) shares his wealth of knowledge from decoding the recipes on the three tablets, from interpreting many other cuneiform tablets, and from archeology digs. Along with details from the recipe tablets, he describes the dining habits, feasts, and cooking apparatus of ancient Babylonia.

Bottero says that no one will ever reconstruct "from such a distance in time and space, the authentic flavor and quality of the scores of ingredients that were used in these culinary creations. We can never recover the taste ... of this rich and appetizing cuisine, whose refinement and brilliance we can only imagine." (p. 125)

And yet... he gives us a vivid picture of banquets, kitchens, and the content of the clay stew pots from nearly 4000 years ago.

So what did an ancient Mesopotamian eat for dinner? The three recipe tablets concentrate on cooking of meat and vegetable stews. Some describe how to serve meat in pastry: "you take the platter prepared with a lining of crust, and you place the cooked birds on it carefully ... You cover the serving dish with its pastry 'cover' and bring it to the table." (p. 72)

Most recipes start with a combination of fat and water, used to begin braising venison, kid, gazelle, lamb, mutton, or small birds. Some recipes specify particular organs (such as gizzard, spleen, or intestines). Some say to cut the meat in small pieces. Some also call for kisimmu -- a type of cheese. Cooks used prepared cakes of pounded seeds or crumbs of baked bread or cake to thicken the sauces.

Many herbs and vegetables in these stews are startlingly familiar -- garlic, leeks, onions, cumin, and coriander. An onion-like plant called samidu, an herb called dodder (now considered a weed), and some unidentifiable herbs also appear in the recipes. Crushed or mashed vegetables appear to have flavored and thickened the stew -- not at all strange to a modern cook. Cooking might be a multi-stage process, starting with boiling the meat, then cleaning it (I guess an analog to washing the scum off of the veal bones in a modern stock), then cooking with more ingredients, and finally "before the broth cools ... you rub the meat with garlic, add greens and vinegar. The broth may be eaten at a later time." (p. 72). To accompany the stews, diners at feasts or official meals ate green salads with vinegar and various sorts of leavened and unleavened bread or cakes.

Cooking took place on an all-purpose hearth over an open fire or on grills, skewers, or racks. This reminds me of my Webber grill, but the author warns me not to think this way. Bread and other food might be cooked directly in the ashes: poets praised the smoky taste. Some recipes also mention an indirect type of cooking stove. (p. 46-47) More fascinating are descriptions of banquets for thousands of inhabitants of a city, where large numbers of whole animals were slaughtered and needed preparation. A modern home cook can't begin to imagine the techniques for such an event.

"Let us not forget that our recipes belong to a refined cuisine, for guests of a certain social caliber, and that we know nothing about the routine of ordinary meals without fanfare among simple folk," writes Bottero (p. 73). His description of these ancient foods, kitchens, and events are indeed fascinating.
Posted by Mae Travels at 9:19 AM

Labels: Food in Literature, Posted in 2008, What did historic figures eat

This is fascinating. One of my biggest sorrows in terms of written history for so many ages is that common life wasn't recorded, for the most part.