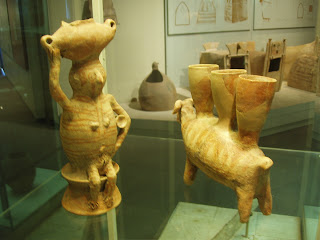 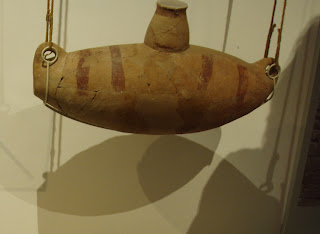 Critics of greedy sellers of adulterated food have always held a special place beneath contempt for those who mess with milk. After all, it's one of the most basic and pure foods, and one of the oldest: I've illustrated that with two photos from the Israel Museum, showing butter churns from the earliest Biblical days. The churn hung from two ropes, and was shaken back and forth on its tethers or carried on a woman's head, as in the statuette.

A land flowing with milk and honey -- what could more totally represent our idea of real, natural food. I'm not fanatic, but I was shocked to read the following. As usual, our corrupt government is willing to do anything for an organized -- and equally corrupt -- industry.

From an article in the online Gourmet magazine -- with links left in:

"Bowing to the interests of corporate cheese and ice cream manufacturers, the folks at the Food and Drug Administration (FDA) appear poised to change the definition of the popular white liquid. Last week they extended the public comment period on a regulation that will allow processors to use a substance called 'ultrafiltered milk' and list it as simply 'milk' on ingredient lists.

"The proposed changes have sparked outrage from farmers’ organizations, who point out, rightly, that there is a vast difference between real milk and the ultrafiltered stuff—also called milk protein concentrates. As the name implies, ultrafiltered milk has been passed through a fine membrane that retains large molecules such as protein and fat, while allowing smaller molecules like water, lactose, and little things called vitamins and minerals to wash away.

"The concentrated fat and protein is cheaper to transport than milk, which explains why manufacturers like it so much. Under current rules, they are free to use the product ... but they must list it as 'ultrafiltered milk' or 'milk protein concentrates' on the ingredient label.

"But ... the industry ... claims that it is 'impractical to comply with the labeling requirements' due to 'economic and logistical burdens.' To add one extra word to their labels? Give me a break.

"You’d think they’d have come up with something better than that. But then, with the FDA firmly in the corporate camp, they don’t need to. Profits will probably trump the rights of consumers to know what’s in their cheese." --
See: Barry Estabrook "Politics of the Plate: Milking It for All It’s Worth."

I feel strongly that the current administration has given free rein to the worst of our society. What else will they do while they are such lame, lame ducks? The farmers' industry website linked above says: "A 2001 investigation by the federal government’s General Accounting Office (GAO) reported ultra-filtered milk is not nutritionally equivalent to fluid milk." As usual, the bureaucrats aren't even accepting the results of their own scientists when it's more convenient for their clients to deny them. I linked to the government website and registered my objection.